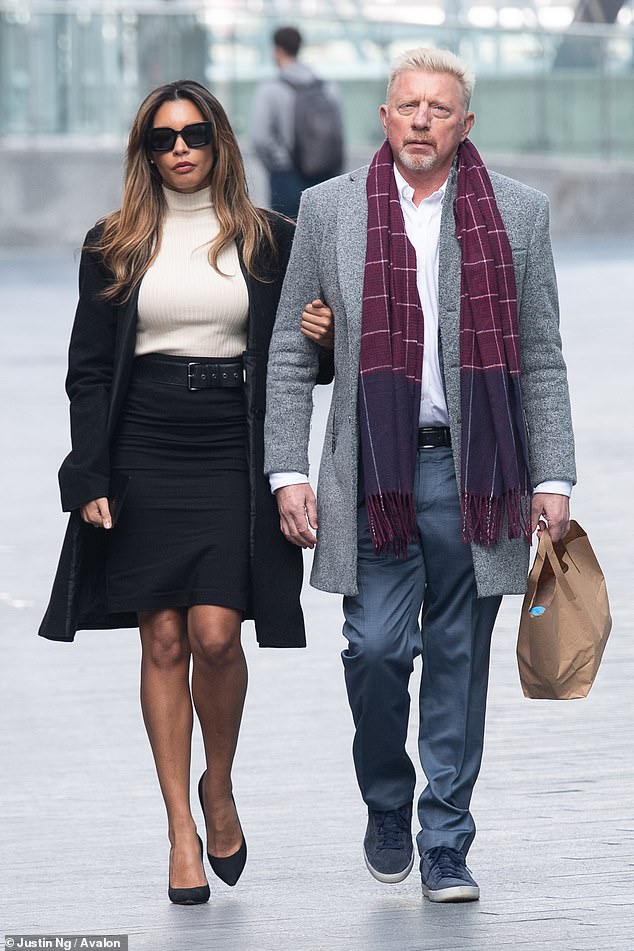 Boris Becker made £38m from tennis but suffered a bad divorce, has ‘expensive lifestyle commitments’ and doesn’t know how many bank accounts he has, a court has heard.

The former tennis star, 54, is on trial at Southwark Crown Court charged with failing to hand over assets, including nine trophies and medals, after being declared bankrupt in June 2017.

Becker testified today in his own trial, sometimes assisted by a German interpreter.

His lawyer Jonathan Laidlaw QC guided him through his illustrious career, including becoming the youngest player to win the Wimbledon men’s singles titles, aged 17, in 1985.

The court heard that Becker earned a ‘huge sum’ of money during his time on the pitch, winning around £38million in prize money and sponsorship deals.

He told the court he used the money to help his parents build a house in his native Germany and paid cash for a family home in Munich, property in Miami and an estate in Mallorca – worth total of around £42 million at the height of the property market.

However, Becker said his earnings “diminished considerably” when he retired from tennis in 1999.

He said he was involved in a ‘very expensive divorce’ from ex-wife Barbara Becker two years later, involving high child support payments for their two sons, and had to support his daughter Anna Ermakova and her mother in a deal which included a £2.5m Chelsea apartment.

Becker also said he had ‘expensive lifestyle commitments’ – including paying £22,000 monthly rent for a house in Wimbledon.

And the six-time Grand Slam winner admitted he wouldn’t be able to give a definite answer if asked how many bank accounts he has.

Barbara Becker, ex-wife of Boris, is pictured at the Bambi Awards in Berlin, Germany, in November 2018

After retirement, Becker went on to coach current world number one Novak Djokovic, work as a BBC commentator and take on the role of brand ambassador for companies such as Puma.

He lived in Monte Carlo and Switzerland before moving to the UK in 2012.

But in addition to the Wimbledon property of £22,000 a month, Becker owed around £4m to Swiss authorities and around £800,000 in debt following a conviction for tax evasion and attempted tax evasion in Germany in 2002.

The conviction related to maintaining properties in Germany while registered in Monaco.

Becker’s bankruptcy stemmed from a £3.85million loan from private bank Arbuthnot Latham in 2013 and £1.2million, with an interest rate of 25%, borrowed from the British businessman John Caudwell the following year, the court heard.

At the time, his annual income was around £2.5million, but Becker said his income “has dropped by at least 50%” and he is struggling to make repayments.

He told the court: ‘The first year of the loan I would repay around a million euros (over £800,000) but in the second year I struggled as various companies failed to extend their contracts .

“My image wasn’t as good anymore, the Becker brand wasn’t as well regarded as it used to be and they didn’t want to be associated with a brand that was criticized in the media.”

Becker said he had faced negative publicity “all over the world”, but especially in his native Germany and the UK, which had an impact on his earning abilities.

As the success of his tennis career increased, the court heard that the number of agents and advisers managing his daily life also increased.

He said: “My role was to train, play well and win tournaments, but literally everything else was taken care of.”

Becker added that he would spend “35 to 40 weeks a year” traveling and living in hotels with suitcases.

And while he had bank accounts in his name, he claimed he never saw the bills or had access to their details.

Mr Laidlaw asked: ‘If someone had told you how many bank accounts do you have, individuals or companies in Germany or elsewhere, would you be able to give a precise answer?’

“I wouldn’t have known,” Becker replied.

Becker makes a comeback during a match at the 1989 U.S. Open Tennis Championships at the USTA National Tennis Center in the Queens borough of New York.

He also revealed he was “shocked” and “embarrassed” after being declared bankrupt days before he was due to commentate at a Wimbledon tournament.

Becker said he was looking to repay Arbuthnot Latham’s loan, including through the sale of his estate in Mallorca, Spain, known as Finca.

He continued: “Because it was all over the world, and I walked through the door at Wimbledon and everyone knew it. I was embarrassed because I was bankrupt.

He said he moved to Monte Carlo in order to use the better training facilities, but had “regularly” stayed in Germany during the time he was convicted of tax evasion.

Becker said he suffered numerous injuries and his sports doctor was in Munich, while he also increased his stays in the city as his Barbara was based there.

Mr Laidlaw asked her: “Barbara is a black woman. How was this relationship between you received in sections of the German press?

Becker replied, “Members of the media wanted me to be with a blond, German-looking woman.

“After we got married and were first seen, she got death threats, which were covered up by the police.”

Jurors heard Becker had two sons with his first wife, as well as a daughter called Anna who he had with another woman under circumstances receiving “some publicity.”

In 2002, Becker divorced his first wife Barbara and, as part of the settlement, gave her a property in Miami purchased for a lump sum of 5 million Deutschmark.

The former tennis star is denying 24 charges under insolvency law.

He is accused of failing to hand over nine trophies, including two of his three Wimbledon men’s singles titles, an Olympic gold medal, his 1991 and 1996 Australian Open trophies and his Cup trophy. Davis and his gold coin.

Becker also allegedly hid around £950,000 from the sale of a Mercedes car dealership he owned in Germany and transferred hundreds of thousands of pounds to other accounts, including those of his ex-wife Barbara Becker and his son. ex-wife Sharlely “Lilly”. Becker, the mother of his fourth child.

He is also accused of failing to declare two German properties, as well as his interest in the flat occupied by his daughter, and of hiding an 825,000 euro (nearly £700,000) bank loan and shares in a technology company.