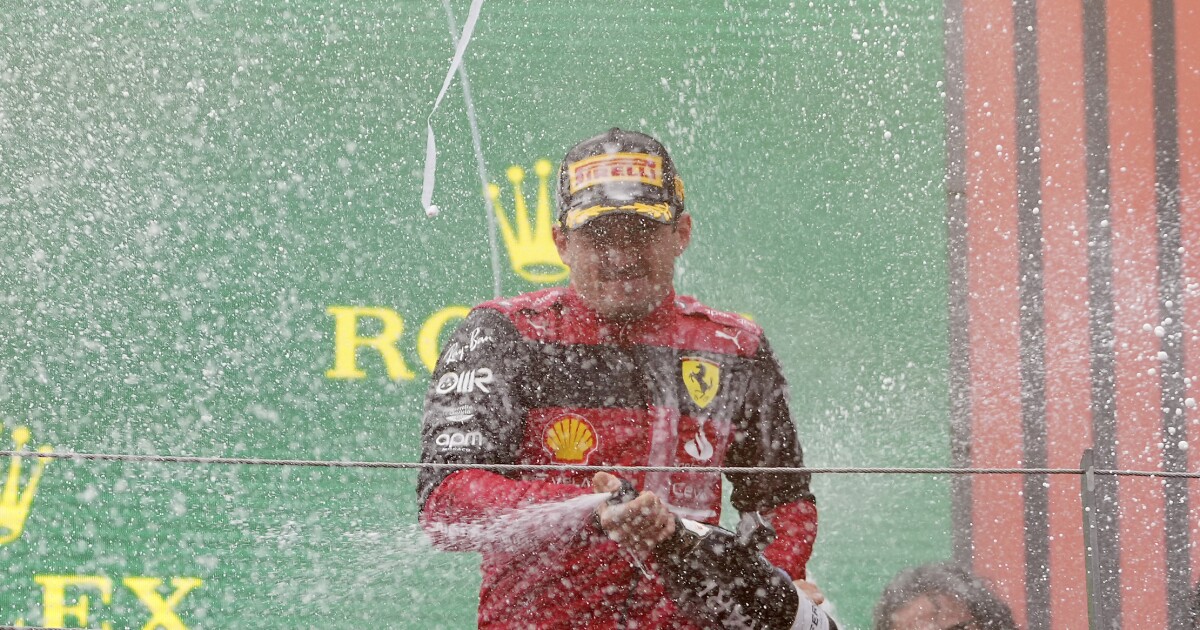 Charles Leclerc reignited his challenge for the Formula 1 title by hanging on to win the Austrian Grand Prix on Sunday for his third win of the season, while Ferrari teammate Carlos Sainz’s hopes of a second place dimmed end when its engine blew as it was about to attack. Max Verstappen’s Red Bull.

Leclerc was clearly stressed in the closing laps as his throttle was not working properly, making it harder to control his speed through the corners.

“Yes! Go!” Leclerc shouted over the team radio after crossing the line. “I was scared. I was very scared. Yep!”

The Monegasque driver held on to beat second-placed Verstappen by 1.5 seconds.

“I really needed this win, the last five races have been incredibly tough,” said Leclerc. “At the end it was really difficult, I had this problem with the accelerator.”

A relieved Leclerc sang as the anthem played on the podium, then engaged in a champagne-spraying joust with a smiling Verstappen. Leclerc also did not forget Ferrari race director Laurent Mekies, spraying him with bubbles.

The mutual respect between Verstappen and Leclerc – both 24 years old and former fierce karting rivals – is growing strongly.

“You were so fast today,” Verstappen said in the post-race recovery room.

Leclerc has moved up to second overall but is still 38 points behind Verstappen – 208 from 170 – with Red Bull’s Sergio Perez dropping to third place. He retired after 26 of 71 laps after being hit on the opening lap as he tried to overtake the Mercedes of George Russell.

Verstappen picked up a bonus point for fastest lap with the eight points he took by winning Saturday’s sprint race.

Lewis Hamilton finished third for Mercedes to earn a third consecutive podium finish. Russell was given a five-second penalty for the Perez incident but placed fourth. Even more impressive as Mercedes had to repair both cars after a late crash in Friday’s sprint qualifying.

“Those are great points and we are improving from here,” Hamilton said. “So grateful to the team for working so hard.”

After cutting on lap 58 of 71, Sainz’s car was burning and began sliding backwards in the gravel as a marshal rushed towards it with a fire extinguisher and urged the Spaniard to jump. Sainz got out in time as the flames licked his racing suit. He was unharmed, sitting on the grass to contemplate his bad luck.

Leclerc’s fifth career victory was one of his best considering how he held on until the end. It was also very welcome for the driver after five difficult races without a podium and a lot of confusion over the team’s decisions.

On July 3, it was Leclerc who was exasperated at the British GP when his team stopped him from following the track rather than pitting him on new tires during a late safety car, which led to Sainz’s first victory and a discussion of team divisions within Ferrari.

This time it was Sainz who kept a bitter taste.

Seconds later, he had more pressing questions as the flames flared around him.

Verstappen never quite looked to claim his seventh win of the season and fifth overall at the Red Bull Ring in Spielberg, where legions of orange-clad fans roared at him in his team’s home race.

“It’s great to see so many fans coming to Austria, it’s just a shame I couldn’t give them a win today,” he said. “We suffered with the tyres. Still, second place is a good result.”

Six years after his debut, Esteban Ocon celebrated his 100th F1 race with a fifth-place finish for Alpine ahead of Mick Schumacher, who drives with Haas after securing his first career points with an eighth-place finish at Silverstone.