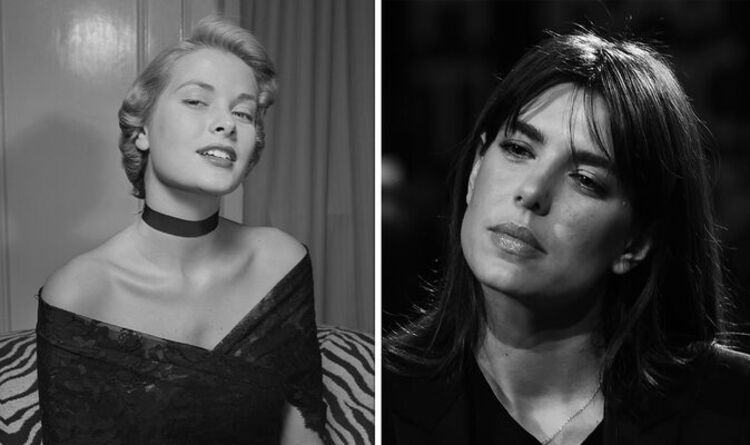 Charlotte Casiraghi, 35, is a Monegasque model, socialite and writer. But she is best known for being the second child and only daughter of Princess Caroline and Italian industrialist Stefano Casiraghi. She is eleventh in line to the throne of Monaco.

When Charlotte married Dimitri Rassam, 40, a Lebanese-French film producer, in 2019, she channeled both her mother and her grandmother.

Like most female members of her family, Charlotte had two marriages – a civil ceremony and a religious ceremony.

For the civil ceremony in June 2019, Charlotte and Dimitrie got married in one of the ceremonial rooms of the Palace of Monaco.

This is also where Grace’s civil ceremony was held, as well as Princess Charlene of Monaco’s big day.

The dress had long sleeves and a scalloped hem.

It also featured three large bows down its center, in the same soft gray as the dress.

The dress has drawn comparisons to the outfit Grace wore at her civil ceremony in 1956, which was a pale pink tea dress with an ivory cream-colored embroidered design.

Grace then changed into a white silk Lanvin dress, and Charlotte did the same after her civil ceremony.

Charlotte’s Chanel dress also paid homage to her grandmother as the bodice mimicked the white dress Grace wore in the 1955 film To Catch a Thief.

The bride even wore a piece of jewelry that once belonged to Grace – a Cartier necklace that was given to the late princess as a wedding gift.

The necklace featured a collection of 64-carat diamonds, set in a three-strand design.

Made in 1953, it was given to Grace by Prince Rainier.

Grace wore the necklace many times while she was a princess, including for multiple portraits.

After Grace’s tragic death in 1982, the jewel was donated to the Prince’s Palace Collection at the Palace of Monaco.

A few weeks after their civil ceremony, Charlotte and Dimitri celebrated their religious wedding in Provence in the south of France.

For this occasion, Charlotte wore a flowing white dress with a transparent neckline and sleeves.

Designed by Giambattista Valli, the dress was reminiscent of the one Princess Caroline wore when she married property developer Philippe Junot in 1978.

the construction dates of the facilities now known