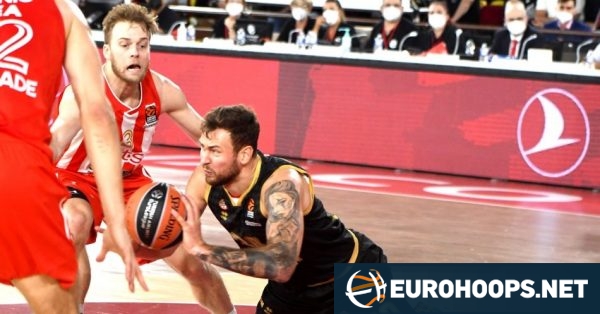 AS Monaco extended their winning streak to two games after beating Crvena Zvezda with a 91-80 comeback victory on the road for round 25 of the Turkish Airlines EuroLeague.

Donatas Motiejunas was the man of the hour for the Monegasque team, leading the comeback effort with a team performance of 20 points and 6 rebounds.

After losing 52-42 at halftime, Monaco burst into the third quarter to level the score at 64 points and took the lead for the first time to escape with the victory and sweep the series of regular season against the Serbian team.

Dwayne Bacon added to Sasa Obradovic’s team effort with 17 points, while Mike James followed with 10 points. Monaco end the doubles week with two wins, to move to a 12-12 record in the standings.

“First of all, it’s a big victory”said coach Obradovic after the win. “We always think and dream of being in the top eight. For someone starting out in the EuroLeague, that would be a big success in the end. […] We played much better defense and in the end we found some good shifts and some things we were talking about that could be open for us, offensively. Like I said, I’m extremely happy to come out of this hot field with the win.

Austin Hollins scored 13 of his 19 first half points for Zvezda, while Nikola Ivanovic had 15 points and 4 rebounds and Ogjnen Dobric had 13 points for the hosts. Zvezda suffered his second straight loss and now slips to an 8-14 record.

Inside Grace Kelly’s Secret Life as an Artist

Who is Chris Von Aspen and when was she pictured with Prince Andrew? – The American Sun