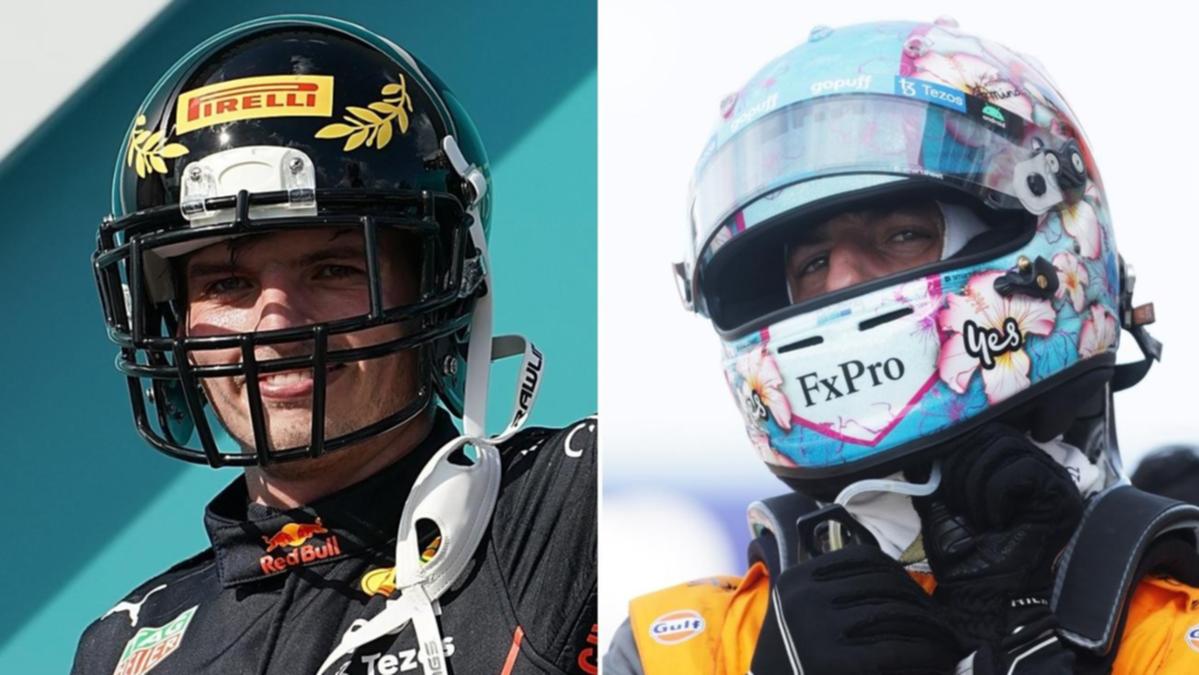 McLaren suffered a horror at the Miami Grand Prix as Lando Norris crashed and Australian Daniel Ricciardo finished outside the points with a penalty to his name.

Watch Miami’s inaugural race unfold in the video above

Verstappen jumped Ferrari’s Carlos Sainz at the start and looked set for an easy win when he passed pole sitter Leclerc on lap nine.

But Norris crashed in a freak accident with AlphaTauri’s Pierre Gasly, bringing out a late safety car that gave Leclerc hope of a win.

The Monegasque driver attacked over four laps only to be undone by Red Bull‘s unparalleled straight-line speed.

Verstappen has now won three races to Leclerc’s two and trails by 19 points in the standings.

“It was an amazing, very physical Grand Prix, but we kept it exciting until the end,” Verstappen said in his podium interview.

“I’m incredibly happy to win in Miami. It was an amazing Sunday for us.

The all-new circuit was criticized by other drivers immediately after the race, with Alpine’s Esteban Ocon, who finished eighth, calling the surface a “disaster” for on-track entertainment.

Pre-race warnings about a lack of grip outside the racing line came to fruition as the drivers were largely reduced to driving in single file.

Mercedes’ George Russell said stepping out from behind another car felt like he was suddenly driving down a wet track.

The DRS and occasional errors made some overtaking maneuvers easier, but the slippery surface and tight, twisty sections of the circuit kept the competitors at bay.

Organizers said before the race they would consider changes for next year, although the slow corners were described as a “necessary evil” due to a lack of space around the track.

The problematic run left Ricciardo stuck in a tight midfield group despite the soft tire punctures under the safety car caused by his teammate.

His 11th place at the flag was erased when the marshals applied a five-second penalty for leaving the track and gaining an advantage.

Ricciardo said the “moments” of the race were fun as he raced against other drivers “but obviously I was never quite in the points” and had to defend more often than not.

“It turned out to be a bit more difficult circuit for us and what can I say, we will continue,” he said.

“It’s tough to do a long race like that and not score points, but what’s done is done.”

The Australian had already run long on his medium tires but was forced to pit hard on lap 32, dropping him well down the order before his second pit stop.

Elsewhere, Ferrari’s Carlos Sainz held onto third place ahead of Red Bull’s Sergio Perez in a reverse result of the battle at the front of the pack.

“We managed to keep the podium, so it’s a decent result,” said Sainz.

Mercedes youngster George Russell capitalized on the strategy to overtake team-mate Lewis Hamilton as they finished fifth and sixth.

Hamilton felt abandoned by his team after being prevented from stopping under the safety car.

“In this scenario, I have no idea where everyone is,” said the seven-time world champion.

“So when the team says it’s your choice, I don’t have the information to make that decision. That’s your job. You have all the details. Today they gave it to me. I don’t understand it.

Valtteri Bottas took seventh place for Alfa Romeo while Alpine’s Ocon battled from the back of the grid to eighth after missing qualifying to replace its cracked chassis.

Formula 1 returns to Europe later this month for the Spanish Grand Prix on May 22 before the sport’s original glamorous event, the Monaco Grand Prix, on May 29.

‘Get an Ambulance’: Live TV horror as race team engulfed in fireball

The Miami F1 Grand Prix turned out to be more Monaco, less misery