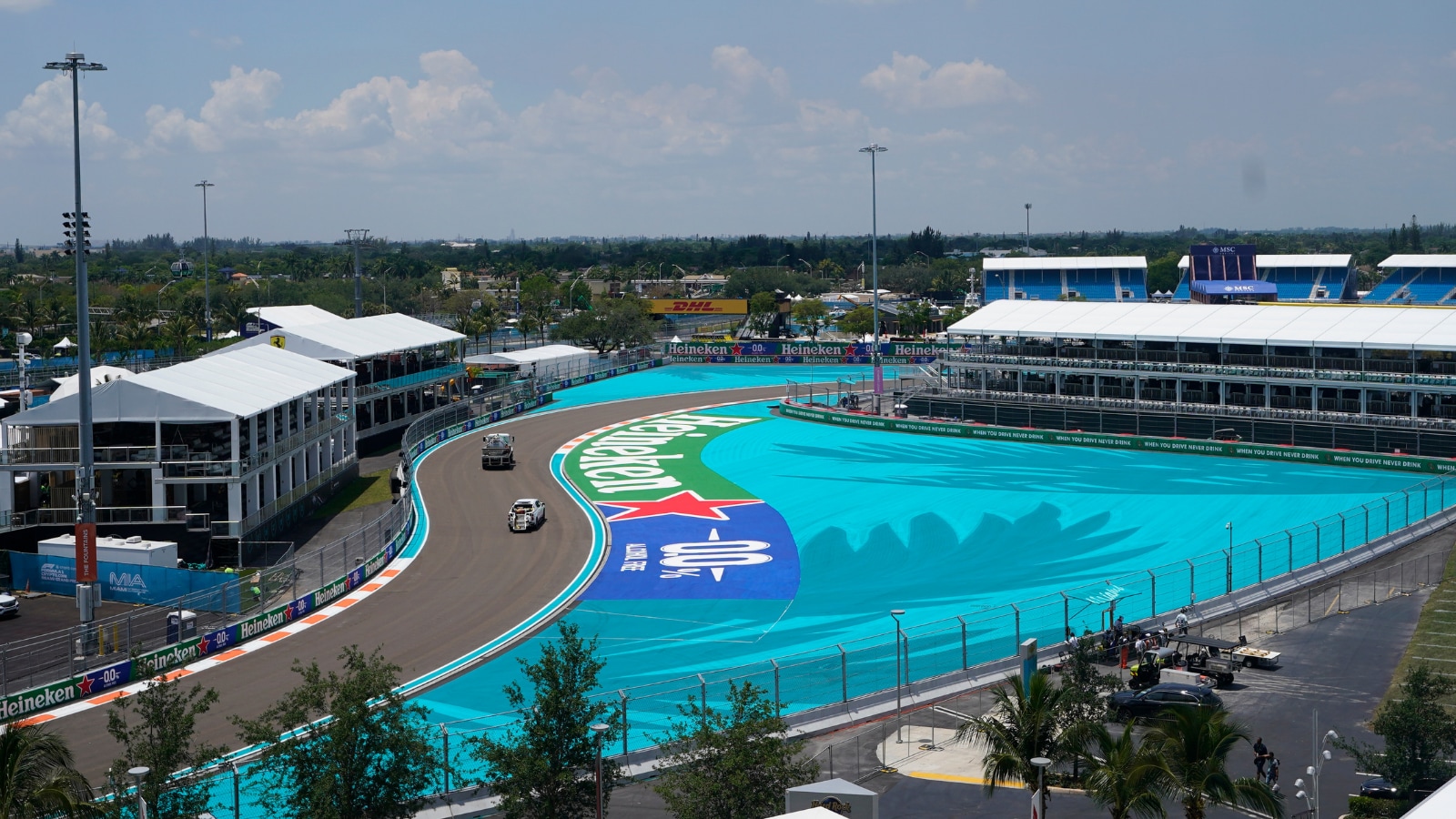 Fans smell a stink in Miami, and it’s not all from the fake marina

Formula 1 is the pinnacle of motorsport in the world and has gained a huge following in recent years, even in countries that cannot roll out the red carpet for the race; India being one of those countries and this author being one of those followers. This column is my attempt to connect with other new fans of the sport and share with them my journey of exploring this fast, furious, and yes, sometimes frustrating sport.

“No, we have Monaco at home”

A yacht in dry dock sits on a painted surface simulating water outside Hard Rock Stadium for the Miami Grand Prix, May 4, 2022. (AP Photo/Lynne Sladky)

The first Miami Grand Prix may never be able to live with this one or its avatars doing the rounds on Twitter. From demanding Jesus look-alike Antonio Giovinazzi to walk on water to warnings against the cannonballs of victory, Miami International Autodrome’s faux port is a gift that keep giving.

It was bad enough when photos of the fake marina under construction leaked online, but the painted water, with the shimmering effect – Florida is the sunshine state after all – was too much to bear. for fans and followers.

the miami grand prix putting yachts and painted water on land around the track is the peak “we have the monaco grand prix at home”— Hayley McGoldrick (@GoldieOnSports) May 2, 2022

The false Marina at #MiamiGP is very silly. It’s okay if you think it’s very silly. For example, it’s fine if F1 wants to do this weird fake movie shooting stuff, but you have to accept that people are going to find that very silly.

The latter may actually come true as Scuderia Ferrari reserve driver Antonio Giovinazzi has confirmed he will be in Miami for the race weekend. Charles Leclerc will therefore not be the only man in red under pressure (looking at you @ScuderiaFerrari admin). The sticky harbor may also receive some water with weather projections teasing rain for Sunday after a typical Florida sun fest on Friday and Saturday.

It’s not so much outrage as an opportunity to poke fun at the show’s inherent Americanism – big, bling, and borrowed. Formula 1 lands in Miami to build on the success of the Austin GP and once again challenge the supremacy of NASCAR and IndyCar in the American market. And he immediately proceeds to copy Monaco, the jewel of F1.

Circuit at the water’s edge? Well…

The original plan dating back to 2018 was to hold the race in downtown Miami and on a bridge leading to the Port of Miami, but a legal objection from one of Miami’s most influential residents’ associations caused the race to fail. plan.

Enter Stephen Ross, owner of the Miami Dolphins professional football team and real estate developer, who has offered his Hard Rock Stadium in Miami Gardens, about 10 miles from the most desirable location. The billionaire leads the Miami Grand Prix consortium and was close to buying F1 before Liberty Media bought it in 2017. (The American company owns the sport in that it bought Formula One Group, head of F1 maintenance in 2017).

So instead of the turquoise bay, you have a 24,000 square foot beach club area with luxury pools and cabanas, and a mock marina with a yacht in dry dock. All that Miami glamor is concentrated in what is essentially a parking lot. Yes, the circuit was built in a gigantic parking lot, hopefully avoiding the fate of the ridiculed Vegas races of 1981-82 around the Caesars Palace hotel parking lot.

And none of this comes cheap to attend. According to a numerical analysis from vegainsider.com, Monaco is still the most expensive race ticket for 2022 at $700 for a three-day grandstand ticket, and Miami is close behind at $640.

But here’s the thing: fans have long accepted the streets and grandstands of Monte Carlo, Monaco, as the domain of the ultra-rich in what is already a niche and exclusive sport. Monaco’s status as a tax haven and the exclusive residency rules of this luxuriously scenic principality which has its own royal family have helped give royal reverence to the fact that the Monaco Grand Prix is ​​not for everyone. In recent years, this reverence has also extended to the Singapore GP which takes place at night around the Marina Bay Street Circuit.

But Miami? How F1 can attract millions of new, mostly young Americans to the sport of hook, line and sinker with the Drive to survive bait only to roll out the red carpet for those with deep pockets who enjoy the Instagram quotient of the event more than the race itself! And that’s the real beef that a significant number of F1 fans are having with the Miami Grand Prix – it’s premium and physically inaccessible, even more than what F1 is known for.

Unlike most other races, with the exception of Monaco, celebrities (Michael Jordan, David Beckham and Dwayne ‘The Rock’ Johnson to name a few) and millionaires on yachts and cabanas can outnumbering the fans in the stands, the fake resort and marina further eat away at valuable real estate that could have been used to accommodate true sports lovers who match its boobies. Ask the Australians.

Austin whetted average Americans’ appetite for home F1 racing with 400,000 spectators at the Texas GP over three days last year – the biggest crowd of the 2021 season. The Circuit of the Americas in Austin has a capacity 150,000 but Miami International Speedway is capped at 85,000, all sold out.

Expected attendance this weekend is around 300,000, and the cheapest of those admissions is the Friday general admission pass for $300. The Friday ticket gives you a preview of practice, $400 is the cheapest for qualifying on Saturday and Sunday, race day will cost you $500 minimum, but only from five areas of the F1 campus.

Next are the beach club tickets. The “sand ticket” costs $1,000 and allows you to see the track and access to a private bar. The “deck ticket” is double at $2,000, which is set to view the stage from the pool, but you must be 21 to enter a private area that comes with the ticket.

According to a Motorbiscuit.com report, first-week hospitality tickets sold for as much as $10,000. A single spot on the real yacht in fake waters will cost $9,500 for one person, $19,000 for two people, and the “yacht club” package for four people would cost $38,000.

Paddock Club and Champions Club tickets, the most expensive and exclusive of all the tours, cost between $50,000 and $150,000.

According to a report in The Associated Press, the luxury suites never went on sale to the public as 5,000 deposits of $5,000 each flooded organizers early on. A pair of Sunday start/finish line seats cost just under $14,000 each. The Family Grandstands and Beach Grandstands were probably the cheapest tickets, but still cost between $700 and $900, Motorbiscuit.com reported.

The skewed report of affordable seats hasn’t gone over well with a section of fans who are frustrated by F1 racers’ flip-flop between affordability and wealth.

Miami GP tickets are under $1,000 on Ticket Master. Price still exorbitant. I’m not going to spend $800, drive 4 1/2 hours in my little Chevy or my mystery reliability BMW, sell my soul for parking, spend $25 on water, sit in a cramped seat and drive off to that.— Kevin Antink🇺🇦 (@antink_kevin) May 6, 2022

they want to increase the viewership in the US, but how the hell is it accessible to new fans if it’s so exclusive???

F1 Grand Prix race week in Miami is here (but only for the wealthy elite). No, ticket prices are not affordable. pic.twitter.com/e2LIa0BQ6W– Florida Open Wheel (@FL_Open_Wheel) May 4, 2022

The cheapest ticket to the Miami Grand Prix is ​​that they let you sit in a lawn chair on the tennis court and watch the race from your phone pic.twitter.com/HStb5NKnJF— jordan (@theonlyjordan__) May 4, 2022

It’s cheaper to fly to Monaco, watch the race from a boat for about $600 for the weekend, stay in an Airbnb and fly back to the US than it is to get tickets to the United States Grand Prix or the Miami Grand Prix 🙃 and then shit! ? pic.twitter.com/8euirJo4O3— ❣️T ✨RIC3👍 (@balaclavabestie) April 21, 2022

But hey, no one else is complaining, let alone the Miami hospitality industry. Hungry for action after two dismal years of Covid-19, Miami hotels are offering $100,000 suites for the three-day gala. Dinner reservations are being grabbed at $3,000 per person, making this a hedonistic F1 weekend.

It’s equally fitting that German car giant Volkswagen chose this week to announce its blessing for its premium brands Porsche and Audi to join Formula 1, partnering with Red Bull and McLaren if the buzz is to be believed. .

But that’s the beauty of having two American circuits on the schedule. Fans who can’t afford Miami can still enjoy no-frills Texas in October. And to borrow from Will Buxton, aka F1’s self-deprecating Captain Obvious, wait until you see drivers circling the fake Eiffel Tower in Vegas next year.

Good, bad or ugly (literally), the organizers love it all, because in marketing, and especially in motorsport, nothing is called bad press.

“I think people enjoy it. I think the people in the back of those yachts watching the race will have fun, and I think the people who don’t, I think it’s funny and it’s fun. is awesome,” Miami GP managing partner Tom Garfinkel said of the vinyl water reaction on the faux marina.