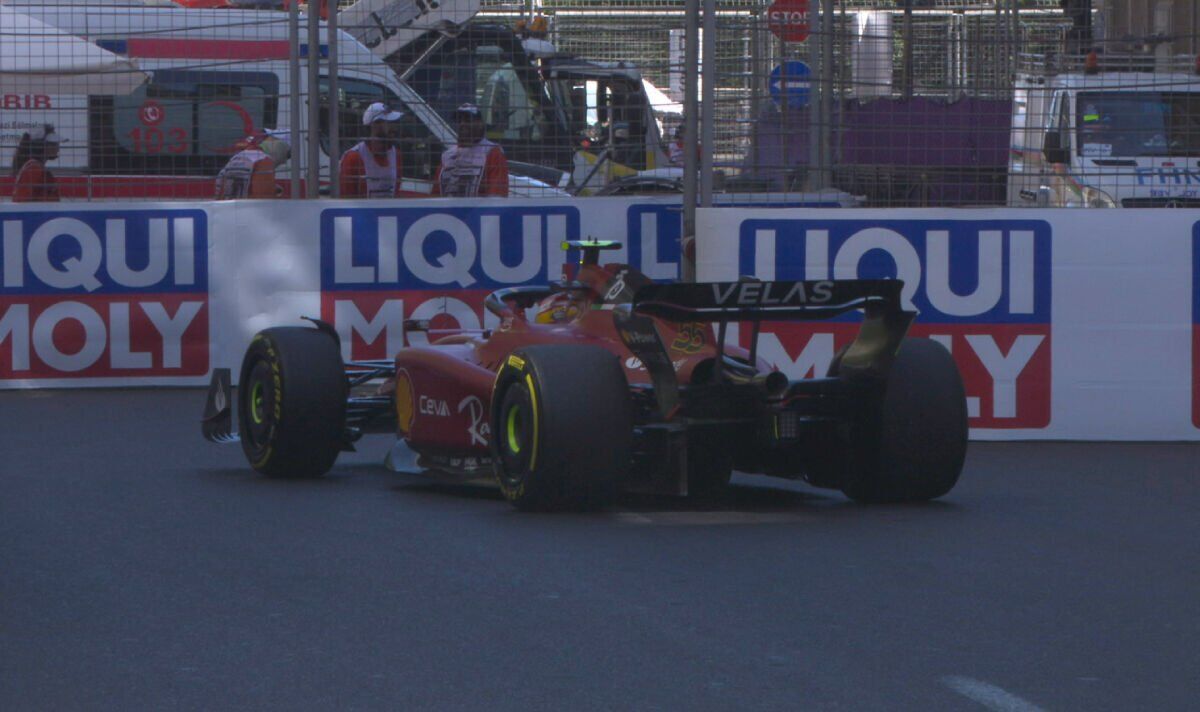 Ferrari suffered more misery on Sunday as Carlos Sainz lasted less than 10 laps of the 51-lap Azerbaijan Grand Prix – and Charles Leclerc then had to retire on lap 21 as well. The Spaniard, who was fourth at the time, ran away at Turn 4 on lap nine and reported a problem with the car, saying on his team radio: “Something went wrong.”

As a result, Sainz was forced to retire from the race and was later joined by his teammate who suffered engine trouble as smoke billowed from the rear of his car. Ferrari wrote on Twitter after Sainz’s retirement: “Unfortunately #Carlos55 had a problem and stopped.”

They later revealed that Sainz had suffered a hydraulic problem. Sainz’s DNF came after a poor start to the Baku race for the Prancing Horse. Pole sitter Leclerc handed over the lead to Red Bull‘s Sergio Perez at Turn 1 of the opening lap.

A virtual safety car was deployed following the Sainz issue which saw Leclerc, after a pit stop, temporarily drop back to third. The Monegasque regained the race lead after Max Verstappen’s first pit stop but was then forced to retire with smoke coming out of the airbox.

Sainz, meanwhile, had been on provisional pole in qualifying on Saturday but started P4 after a poor second lap in Q3. He admitted pushing the car too far as he squandered pole, explaining: “I felt like I was in contention for pole only after the last two races, especially before Monaco, I wasn’t that far ahead then and that’s what happens when you push to the limit. Sometimes you take P1 like I did in the first lap Q3, and sometimes you go over it. Obviously I overtook it in Q3.

The 27-year-old is having a disappointing season for Ferrari so far and entered fifth in the Drivers’ Championship this weekend, but 33 points behind team-mate Leclerc and 42 behind championship leader Verstappen.

A mix of mistakes and misfortunes weighed on the former McLaren driver, with this third retirement of the season. He finished second in the Monaco Grand Prix in the previous race before this year but could have won it on another day, insisting it was a “bittersweet” result.

He said: “It’s bittersweet, especially because I was leading the race before the pit stop. After the pit stop I had a terrible lap behind a run-in car. It cost me a few seconds of race time, which was enough for Checo to jump me.

“The race win was there, but unfortunately these things happen around Monaco. It was my turn to be a bit unlucky and then I tried everything to pass but here with these wide cars, it’s is tricky.”

Following his latest DNF, the gap between Sainz and title contenders Verstappen and Perez will only grow. Leclerc has started on pole in the last four races, including this one, but hasn’t won any of them.

Lee Mallaghan obituary: Tyrone engineer, inventor and businessman who devoted his wealth and energy to the £100m restoration of Carton House