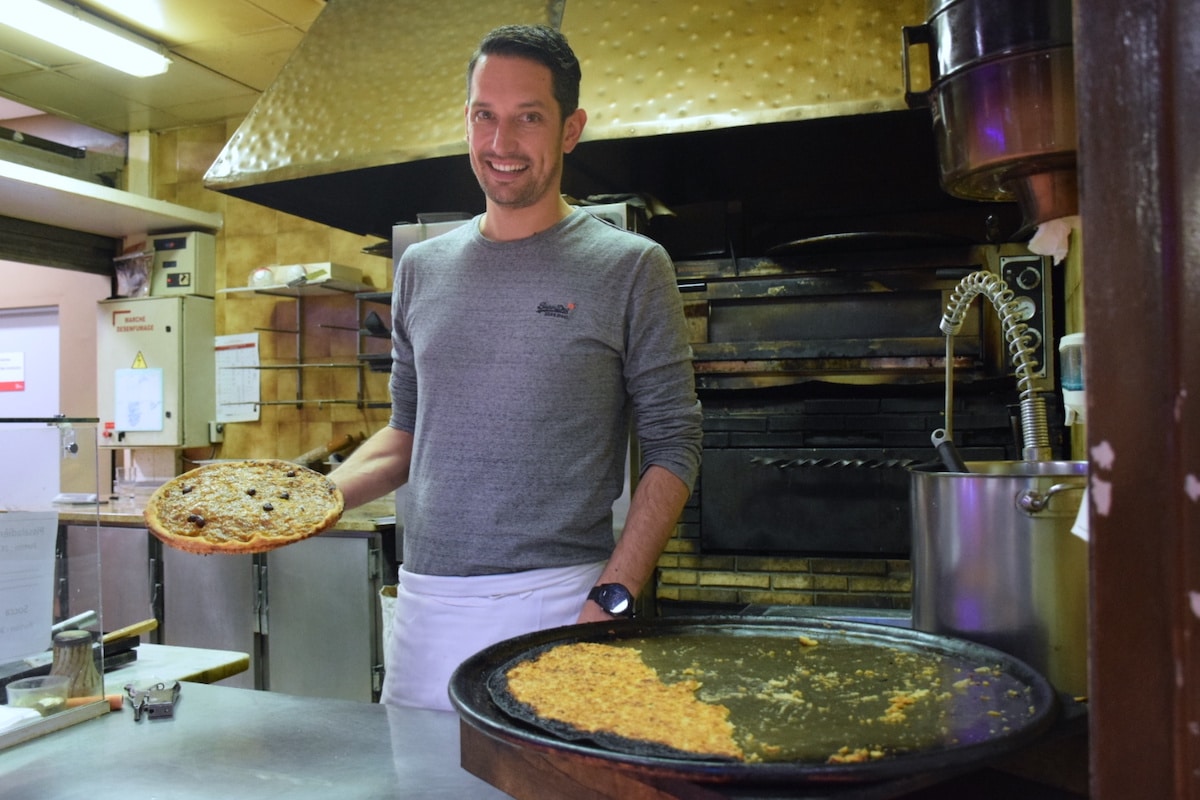 After a career light years away from the world of socca and pissaladiÃ¨re, Julien has taken on a major challenge: to take over his father-in-law’s business at the Condamine market. He is the last of our series of portraits dedicated to Monegasque entrepreneurs.

It is one of the institutions of the Principality. â€œChez Rogerâ€, in the halls of the Condamine market, delights its customers every day with its soccas and pissaladiÃ¨res, all handmade. But since 2019, Roger is no longer the one behind the counter. In his place, it is his son-in-law, Julien, who takes care of the preparation of the dishes, and alone takes care of the store and the sale.

Julien, originally from Villefranche-sur-Mer, has no plans to work in this branch. â€œI had an atypical career, he confides. I did a bachelor’s degree in electrical engineering. But I didn’t like it at all. I then went to business school in Nice, specializing in marketing. But they weren’t hiring in the field at the time. “

After a commercial career in the field of events, then training in insurance and asset management, Julien Bravetti finally finds a career that appeals to him: banking advisor in Monaco, at SociÃ©tÃ© GÃ©nÃ©rale in La Condamine then in his branch. from Fontvieille.

An institution which owes its existence to the Princely Family

Ten years later, the young man took a whole new turn: taking over the business from his father-in-law Roger, which started in Monaco in 1976. A start in which the Princely Family took part.

â€œMy stepfather often told this story,â€ says Julien. He had met Monsignor Rainier and the Prince had said to him: â€œSo my boy, what can you do? My father-in-law replied: ‘I know how to make socca and pissaladiÃ¨re’. The prince helped and encouraged him, and they kept in touch afterwards. (â€¦) Roger talked about how little Prince Albert II would come with his father and sit on the counter to eat socca.

And this link between the Princely Family and “Chez Roger” has never been broken. Forty years later, Prince Albert II was back at the covered market, for the handover of power between Roger and his son-in-law.

A family business from start to finish

However, passing the torch was not easy. Julien can attest that he had trouble convincing Roger to sell his business, when they learned that he was suffering from cancer in 2017.

â€œWhen he got sick, it was closed for eleven months. He didn’t want me to take over his business, but I kept insisting that it wasn’t lost. During the closing, there was a real manifestation of solidarity to encourage him, to convince him to reopen. Everyone said that the market socca was an institution, that people had grown up withâ€¦ When it finally reopened, he was very tired and needed someone’s help. I left the bank and started a few days later.

For a year and a half, the two men worked together. Completely new in the field of socca and pissaladiÃ¨re, Julien learned everything alongside his stepfather. Many were skeptical about the move: â€œMy stepfather was temperamental. A lot of people thought we couldn’t get along. And in fact, it went very well, â€recalls Julien.

It is in all serenity that Roger entrusts the keys of his store to his son-in-law before retiring for good, very weakened by his illness. After the death of his father-in-law in January 2019, Julien Bravetti wished to keep all the know-how of his mentor, to guarantee customers the same quality of products.

” I did not change anything. It was my deliberate intention: for things to be exactly as Roger did. My pissaladiÃ¨res are stretched by hand, all my onions are fresh, peeled every dayâ€¦ I wanted to stay traditional.

A family business that uses traditional methods reassures customers, most of whom have remained loyal to the institution. Very happy to serve a very local and regular clientele, Julien Bravetti does not intend to leave Monaco, nor to consider expanding. â€œI need to be here. It’s my baby here, I feel good where I am, “he admits.

The only small regret in this extraordinary journey: not having had the time to learn to cook other products, as Roger, a baker by training, had promised him. â€œIt’s a shame, we missed a shot. Once I have renovated the stand, maybe we can add one or two more products? “A project which, he promises, will always respect the tradition, the artisanal products and the know-how of his father-in-law.

SEE ALSO: In Monaco, the best pasta has a name: Cesano

TECH TUESDAY: The key developments that allowed Mercedes to come from behind to win its 8th constructors’ title