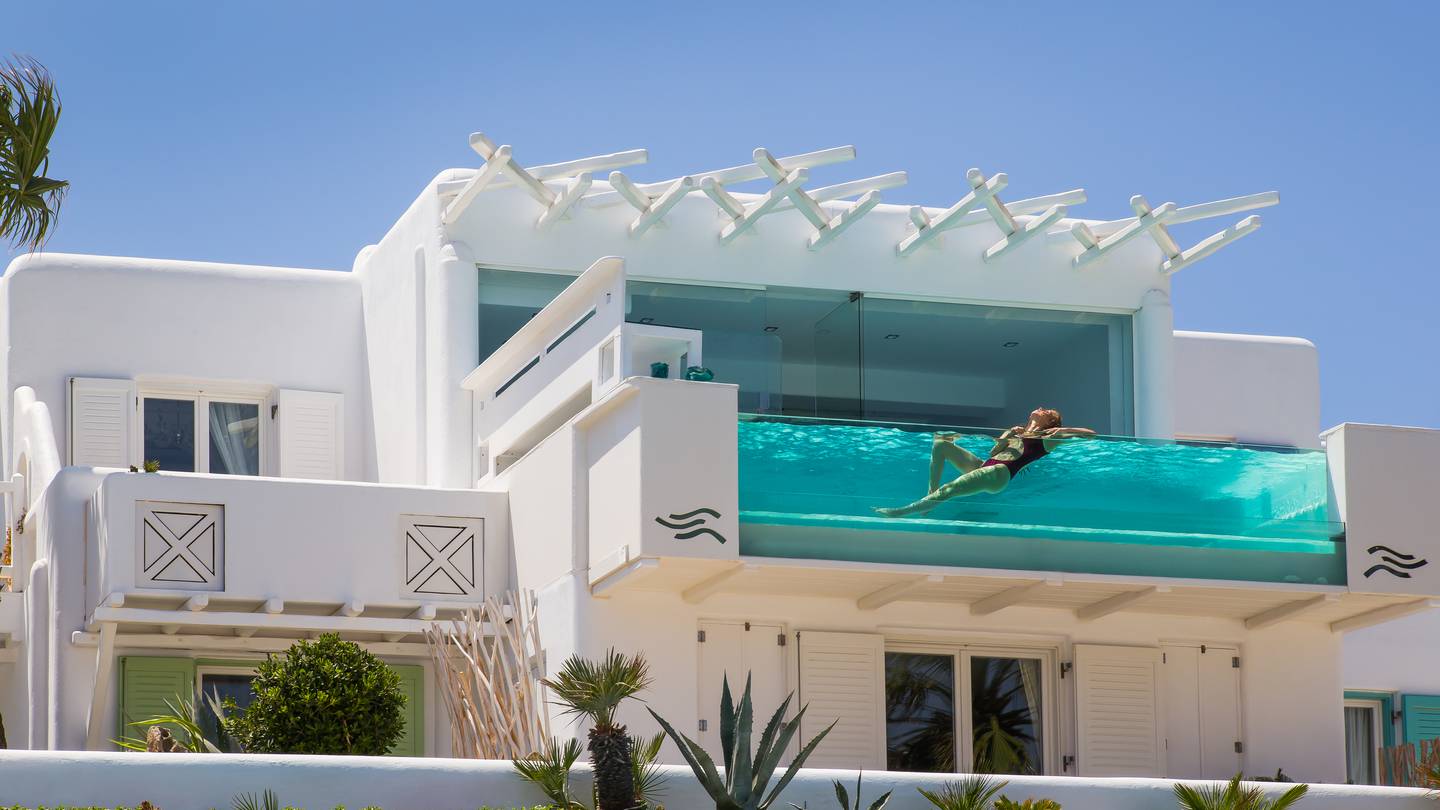 Chances are your Instagram feed has been inundated with photos of Mykonos over the past two months as floods of UAE residents decamped to Greece’s most popular party island.

The Cyclades hotspot has a hard-earned reputation as a playground for the wealthy and young revelers. I, alas, am none of that.

But what Mykonos’ wild reputation fails to take into account is that beyond crowded beach clubs and overpriced drinks, it offers all the attributes that make any Greek island so appealing: beautiful beaches , good food, picturesque villages and friendly people.

Kivotos Mykonos was opened almost 30 years ago, making it one of the first boutique hotels in Greece.

Its design, made up of whitewashed walls, narrow paths, hidden corners and unexpected waterholes, is a nod to traditional Greek villages.

The year it opened, the hotel welcomed fashion designer Jean-Paul Gaultier, who has since become a regular.

We start our vacation in Mykonos with a rookie mistake. Instead of arranging an airport pick up with the hotel, we nonchalantly opt to take a taxi on arrival.

Turns out there are only about 30 taxis on the whole island – and none of them are at the airport when we land.

We find ourselves sitting on the sidewalk for about 40 minutes in the scorching sun, alongside a motley crew of other red-faced tourists, waiting for taxis to materialize. We do, eventually, but a lesson for the wise – arrange for hotel pick-up at the airport, whatever the cost.

The drive to the hotel takes about 15 minutes, although we are advised that we are lucky there is no traffic, as the two-lane roads on the island are prone to congestion during the busy summer months.

Our journey takes us over scenic hills and down into Ornos, an idyllic bay flanked on two sides by mountains. Kivotos is perched on one of them.

A discreet entrance leads directly from a main road into a cool courtyard surrounded by lush vegetation. We arrive well before check-in time but, after a quick tour of the property, we are quickly shown to our room.

Although it’s home to a string of essential Mykonos beach clubs, Ornos is a quieter, more family-friendly affair than many of the island’s bloated party spots.

The bay is dotted with mega-yachts, befitting Mykonos’ reputation as a playground for the wealthy.

To the south, the small but charming village has a bakery, pharmacy, supermarket and old-fashioned fish restaurants, all within a five-minute walk of the hotel, as well as boutique hotels and a new outpost breathtaking Dubai. Restaurant La Cantine du Faubourg.

Mykonos’ main town, Chora, is a 10-minute drive away, for those who want to mingle with the crowds of selfie-taking tourists or the area’s resident pelican.

The main selling point of Kivotos is that it offers a quiet retreat from the worst of the madness, yet easy access to the many delights of Mykonos.

Mykonos is known as “the island of the winds” thanks to the meltemi, a dry northerly wind that blows over the Aegean Sea during the summer months.

Kivotos, which descends a hill towards the sea, is a constant recipient of this cooling breeze.

The face mask was a rare sight during our entire stay in Mykonos, with the Greek islands apparently having a moratorium on Covid-19 for the summer season.

Kivotos offers a selection of 40 suites and villas, including junior and deluxe suites with sea views, pool suites and a signature suite with an Instagram-dreaming glass-encased private pool.

There are also two multi-story waterfront villas on either side of the property, each with a private plunge pool.

Our junior suite has a separate living room and bedroom and opens onto a terrace with a glassed-in plunge pool. It overlooks the resort’s other white-roofed suites and the yacht-strewn bay beyond.

The whitewashed walls and wooden ceiling beams are offset by colorful accessories, including a hot pink bust of an ancient Greek warrior.

A large bathroom has a Jacuzzi, a rain shower and a double sink. The decorative elements seem to have been chosen largely at random, so there’s not a whole lot of cohesiveness in terms of design, but that adds to its charm.

We find it difficult to stray too far from the hotel’s infinity pool, which overlooks the bay and provides a great Greek island vacation vibe throughout the day.

It’s lively, but not too lively, perfect for those who want to enjoy Mykonos in a bit more grown-up way.

A statue of a sea maiden, made by famous Greek sculptor Dimitris Armakola, stands in the center of the pool.

There are couples’ lounge chairs semi-submerged in the water, with surfaces to rest your drink on and music that hints at Mykonos’ party vibe without overwhelming the senses.

A set of steps lead down to a rocky stretch of beach, where a roped path connects huts that are also half-submerged in the shallows. It’s an easy and incredibly relaxing way to spend the day.

The property houses two shops, one of which specializes in sustainable products, as well as a small spa.

Breakfast is served on a terrace on one of the hotel’s highest points, with stunning 180-degree views of Ornos Beach and the mega-yachts drifting in and out of the bay.

A basket of pastries comes standard, complemented by a choice of a la carte options, including cereals, egg dishes, pancakes, salads and French toast.

On a particularly decadent morning, I opt for the Kivotos Special ($17), poached eggs on an English muffin topped with Hollandaise sauce, shaved Parmesan, truffle and salt.

The avocado toast ($14) serves as a healthier alternative the next day.

Lunch and dinner are served poolside at Namah Restaurant, which offers a concise but interesting menu.

There are the classics, from the club sandwich to the signature burger, but also a selection of traditional Greek dishes, including appetizers of squid and octopus, and a beetroot risotto ($19) served with goat cheese, pine nuts. and dried strawberries, which becomes an instant favorite.

The ribeye tagliata ($30) is another highlight.

Prices are also quite reasonable, considering the extortion that takes place in the rest of the island, where a table for sunset drinks can easily cost at least $150.

With the exception of an overtly rude bartender, the staff were exceptional – friendly, chatty and helpful, whether serving breakfast pastries or delivering an endless supply of iced coffees to the poolside. swimming pool.

There was genuine warmth from everyone on the team, who apparently had mastered the art of traditional Greek hospitality.

The hotel manages to be edgy and cool, but also warm and welcoming.

One of its most interesting features is the artwork scattered throughout, which combines traditional Hellenic scenes with elements of pop culture, such that a bust of the goddess Aphrodite is covered with an image of Bart Simpson and pink donuts; and a curvy statue is covered in graffiti and cartoon graphics.

It’s a playful and whimsical addition to an already visually distinctive property.

The recurring water pressure issues in our bathroom were the only real downside.

Hire a car or buggy if you want to get around the island – taxis are like gold dust. Otherwise, just park by Kivotos Pool and stay put. You will not regret it.

The chic but not too harsh vibe of the property incorporates all the charm you’d expect from a Greek island, without being tainted by the pretentiousness of other parts of Mykonos.

This review was conducted at the invitation of the hotel