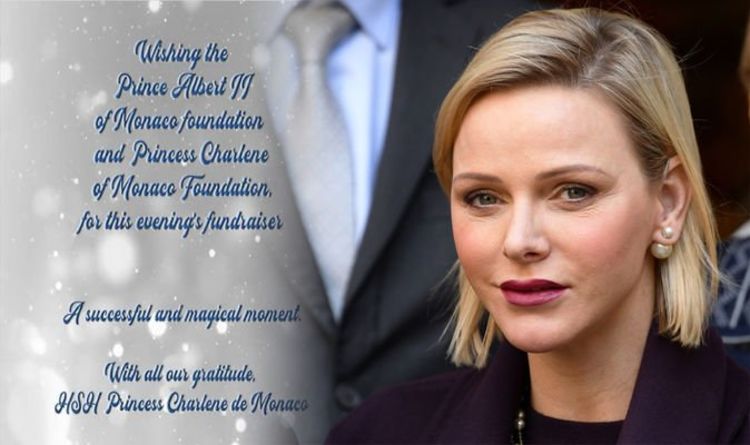 Princess Charlene, 43, posted the video on her Instagram account, scheduled to coincide with the Monte Carlo Planetary Health Gala, and offered her support for the event. However, the video appears to have raised more questions than it answered, with the royal now out of Monaco for more than five months due to mysterious health issues.

The video begins with a text saying: “Wishing the Prince Albert II of Monaco Foundation [sic] and the Princess Charle Foundation in Monaco for the fundraising evening … a magical and successful moment.

“With all our gratitude, HSH Princess Charlene of Monaco.”

The following image shows Charlene’s head, adorned with a tiara, appearing to emerge from the water.

The caption then reads: “As I was born of the ocean, the ocean was born of me. I present to you a piece of both.”

The image was taken by photographer Vanessa von Zitzewitz and posted for the fundraising project, but is undated and is believed to have been taken when Princess Charlene was still in Monaco.

The video has been widely interpreted as an attempt by the princess to show that she remains attached to Monaco, but it seems to have turned on her, drawing even more attention to her absence.

Le Figaro newspaper called the message “enigmatic”, while Elle magazine said it was “mysterious” and The Times said it raised “concerns”.

Charlene left for South Africa – where she grew up – over five months ago, on what initially was to be a brief trip to work with her foundation.

Earlier this month, she was rushed to hospital when she collapsed from a “serious” sinus infection, an assistant said.

The princess is said to be in “stable” condition after the incident, but the hospital has not confirmed details of her treatment for confidential reasons.

However, the mystery surrounding the situation has led to widespread speculation that her marriage is breaking down and she will not be returning to Monaco.

Charlene was last seen in Monaco in January, with many speculating the Monegasque royal family was breaking up.

She told South African radio that she was staying in her home country for medical reasons, saying in July that she “cannot force a cure” – although that did not do much. to quell rumors.

Prince Albert tried to end the speculation in an interview with People Magazine, insisting his wife left Monaco to work and visit family, not because of a fight.

“She was going to South Africa to reassess the work of her foundation there and take some time with her brother and some friends.”

He said the trip was “only meant to be a week’s stay, 10 days maximum”, and is not due to Princess Charlene going into “exile”.

He insisted that it is “absolutely just a medical problem”.

However, the royal admitted he should have responded to rumors about the marriage issues sooner, but explained that he had “focused on taking care of the children” and assumed the speculation would pass.

Prince Albert added that his wife was “ready” to return to Europe, although no date was mentioned for her return.

The family then organized a trip to South Africa to visit Charlene – whom she spoke about on Instagram – but missed her children’s first day back to school in Monaco.