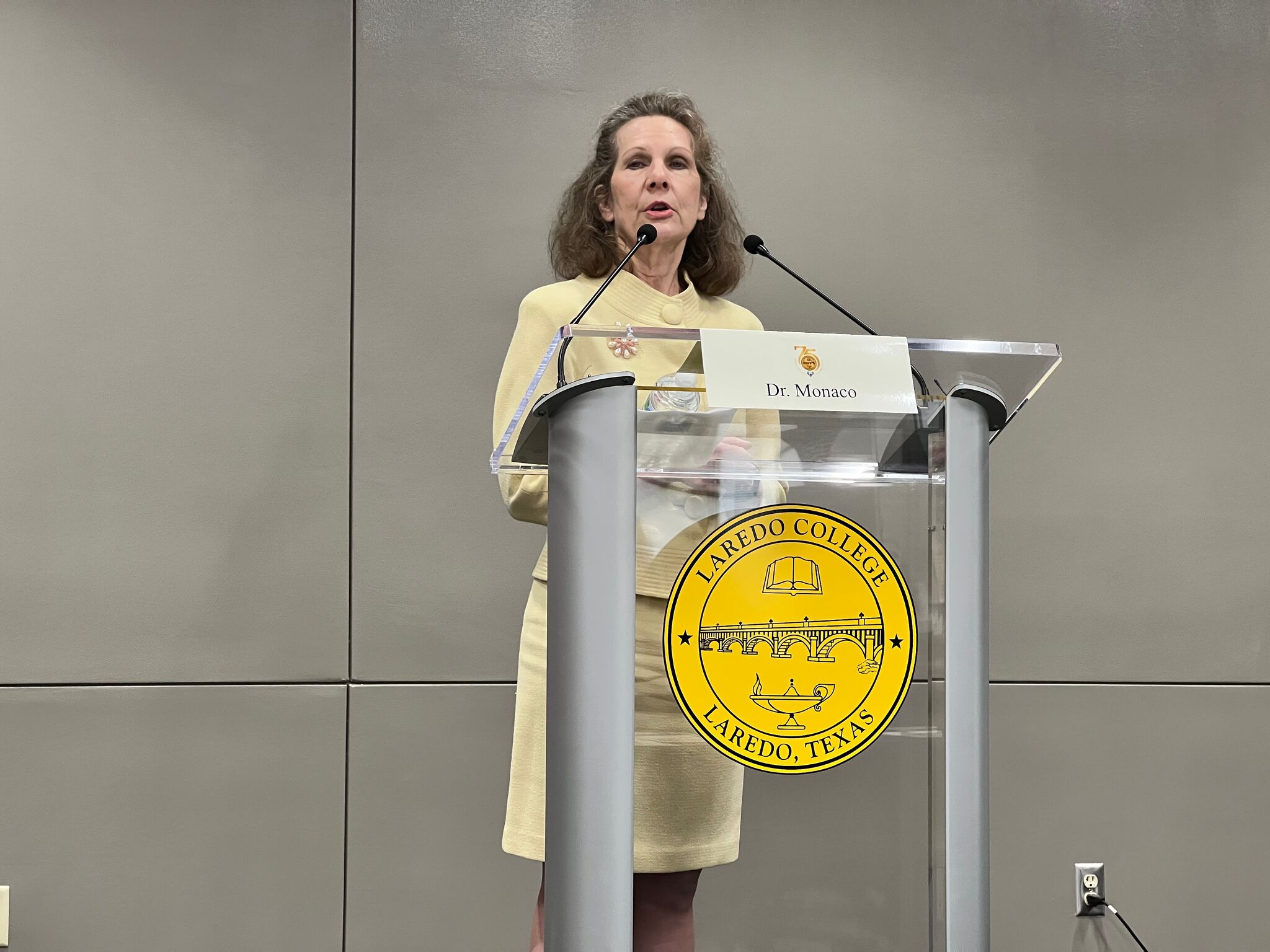 In the final stages of their presidential search, Laredo College began the three-day Open Forums with the three finalists for the job as they answered questions from the audience of faculty and community members.

The eighth president of Laredo College is expected to become the first woman to take on the role, as three female finalists were announced two weeks ago. And the first to answer questions was Dr. Pamela Monaco.

Monaco has served as Vice President of Academic and Student Affairs at City Colleges of Chicago-Wilbur Wright College for nine months. She also served as Dean of Education at Wilbur Wright College for three years, Dean of Graduate and Continuing Studies at North Central College for four years, Vice President of Professional Studies and Director of Academics at Southwestern College for two years, Dean of Arts and Sciences at Brandman University for two years, and Director of University Without Walls at the University of Massachusetts Amherst for one year.

Forums are held in the morning at LC South Campus and in the afternoon at Fort McIntosh Campus and are divided into four parts. The first is the 10-minute opening statement for candidates to introduce themselves to the community. Then, three general questions are posed to the candidates, followed by questions from the public. Attendees receive a card on which they can write a question for the candidate, then a Laredo College Liaison collects the cards, and Senior Director of Strategic and External Initiatives Michael Gonzalez selects questions from the audience to ask the candidate . The fourth and final part of the forum includes the candidate’s closing remarks.

The first question from the audience asked Monaco what attracted her to Laredo College, what areas she thinks the college can improve on and how she sees the college in five years.

Monaco said one of the reasons she was drawn to Laredo College when she saw the job advertisement was that the college serves a student population that often struggles financially.

“They don’t have a lot of choices,” she says, “If they want to stay in this community and they want to go to college, this is where they come. The opportunity to be a such an important part of the economic prosperity of the city, counties and students is just incredibly appealing because, as I said, the idea of ​​being able to transform lives is incredibly good work.”

Monaco said they would not come to Laredo College with an exact priority list of what to do first because that would be presumptuous. Instead, she should do more due diligence and discuss what is needed with those involved and the community. She said that whenever she started a new job, her priority was to listen to everyone and take notes and then make decisions based on the feedback she received.

“I need to hear from you,” she said. “Yes, presidents make decisions, they make tough decisions. But the president should make decisions based on consultation, so it’s a team effort and we all decide.”

Another question from the audience asked how Monaco would encourage students to return to campus. She believes faculty should spend time creating that “FOMO,” or fear of missing out, for students so they want to come back to campus on their own. She also shared that staff should think differently to adapt to post-pandemic education, as going back to how it was before is not realistic.

“I think part of what our future holds is recognizing that higher education is going to be different,” she said. “It’s not at all a return to what we had before.

“We have evolved. People learn and teach differently.”

Regarding financial matters, Monaco believes that Laredo College should work closely with business and industry in terms of tailored courses and training for the college workforce. She said Laredo compares to Chicago in that economic development is crucial in both cities, its priority being to attract business and use opportunities not only to attract people, but also to entice people to stay in Laredo.

“We have the talent here because we have teachers in so many different fields that we can put something together and give them personalized lessons,” she said.

In her closing remarks, Monaco thanked the community for the warm welcome to Laredo and shared the story of her turbulent day of travel on Sunday – saying she and her husband had been on a long journey with canceled flights. However, a member of Laredo College was waiting for him at the airport Sunday evening after 10 p.m., which gave him an accurate picture of the reception LC has already given him.

“I can’t tell you what it meant for my husband and me, because we had been at an airport for 14 hours then,” Monaco said. “I thought that was probably a test for me because the president has to be resilient, and I think I passed it. But having someone on a Sunday night waiting, worrying about me and wanting that I have a good experience, it tells the world how much you care about students and each other.

“I hope I will be chosen, but I know you will make a good choice because I don’t think you have a candidate in front of you who would not be a good choice.”

Originally from Washington D.C., Monaco studied English at the Catholic University of America and also attended George Washington University with a BBA in marketing in 1981. She then pursued a doctorate in English and theater at the University American Catholic.

The forums will continue for the next two days with Dr. Naydeen González-De Jesús taking her turn on Tuesday and Dr. Maria “Minita” Ramirez to conclude on Wednesday.

The LC South Campus Forums will be held from 10 a.m. to 11 a.m. in the College of Health Sciences, room A118. Fort forums. The McIntosh campus will be from 3:30 p.m. to 4:30 p.m. at the Falcon Bank Executive Conference Center. LC states that a limited number of places will be available on a first-come, first-served basis, and attendees will be asked to complete a feedback form subsequently given to the LC Board of Directors for review.

“Laredo College is the pioneer and largest institution of higher learning in Laredo, and it has received the stellar designation of being ranked as the best community college in the state for two consecutive years,” said Lupita Zepeda, President of the Laredo College Board of Trustees. “Selecting a presidential successor to continue leading such a successful institution is a collective task that has involved dozens of people at all levels of the organization and respected community leaders. Now our community will be able to meet and hear each of our accomplished finalists directly.”