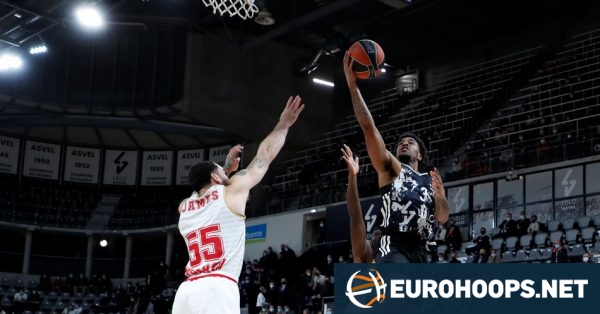 By the Eurohoops team / [email protected]

Around a month after their EuroLeague Round 19 clash, ASVEL got their revenge against Monaco at home with a 87-79 win in an epic double-overtime battle to extend his blistering six-game streak in France’s Betclic elite.

Marcos Knight called the game for ASVEL, with a key presence in the second overtime, and finished the game with a double-double of 21 points and 11 rebounds. Chris Jones also stepped up with 19 points for the hosts, Matthew Strazel followed with 16 points and James Gist added 11 points.

ASVEL went ahead in the game with a 14-7 run, although Monaco recovered at half-time to take the lead with a two-point lead (27-25). The hosts controlled the third quarter before Monaco emerged with a comeback and Leo Westermann made it a two-point game with 43 seconds left in regular time.

Alpha Diallo scored at the buzzer to send the game on in the extra five minutes where Mike James came on strong, although ASVEL managed to survive down the stretch.

James led all scorers in the game with 23 points for Monaco, Will Thomas added 15 points and Donatas Motiejunas dropped 12.

With the victory, ASVEL overtakes Monaco for second place in the standings, improving to a record of 13-6, while the visiting team drops to a record of 12-7, tied with Le Mans.

Princess Diana felt ‘connected’ to Grace Kelly during her friendship