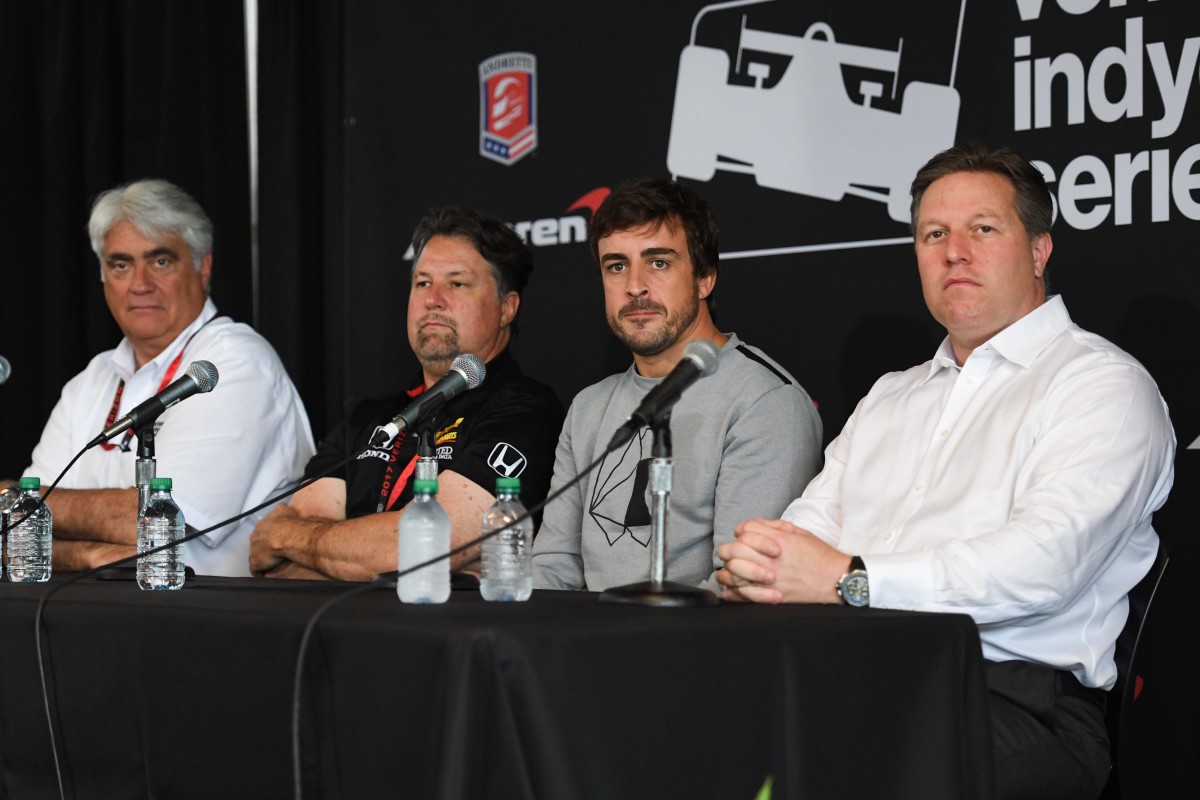 Michael Andretti and Zak Brown: Joined at the hip, with a possibility of coming together in the future?

In March 1981, nine-year-old Zak Brown’s parents, although not motor racing fans, took him to see the United States Formula One Grand Prix in Long Beach, California. Michael Andretti’s father Mario was also present that day, qualifying sixth and finishing fourth, in what would prove to be the only highlight of his only racing season for Alfa Romeo.

Finishing just behind Mario was fellow American Eddie Cheever, whom Brown remembers meeting that day, and the young Californian was immediately hooked on the sport.

Over the next few years, Brown asked his father to take him to many local events and returned to Long Beach with a friend’s family in 1987, the event now featuring Indy cars. Mario Andretti would win this time and was joined in the race by his son Michael, who finished fourth.

The friend’s family had a connection and Brown ended up having dinner with the elder Andretti and getting his advice on starting his own racing career. Starting out in karting with money he made selling two watches he won on “Wheel of Fortune,” he’d also come close to sharing a track with the Andrettis in a single Indy Lights race at Laguna. Seca in 1995.

It turned out that while Brown’s passion was motor racing, his talents were more in closing financial deals, and it didn’t take long to find the formula to combine the two. While he didn’t regularly find himself at the front of the pack as a driver, he immediately found success in an area that many of his competitors found more difficult: finding sponsors.

The same year as his Lights race at Laguna, Brown founded his company Just Marketing International, and while sponsors weren’t lining up for what was then a divisive IndyCar series, he immediately found success in working with drivers in the burgeoning NASCAR series. . By 2001, Brown had stopped his own run to focus on JMI.

By 2001, Michael Andretti had left his longtime home of Newman Haas to join Team Green, where he could return to compete in the Indy 500 after being sidelined since 1995 by IRL-CART politics. Andretti was also thinking about how he could stay in the sport when he was done driving and mentioned to team owner Barry Green his interest in running his own team in the future.

A year later, Andretti bought a majority stake in Green’s organization, becoming CEO of the newly renamed Andretti-Green race. He raced full-time for the team in 2002, but decided the 2003 Indy 500 would end his time as a full-time driver, as he found dividing his attention between ownership and driving n was not an effective formula for either.

Although he was pushed to micro-manage every detail of his growing business, Brown found enough time to return to the cockpit on occasion in 2006, albeit in lower-level and amateur competition. In a Ferrari Challenge event, he won the first of two races after leading from start to finish, and took the podium in the second event, finishing both races ahead of future Aston Martin boss Lawrence Stroll. .

As for JMI, Brown brokered a deal to become a full-time consultant for the Indy Racing League, which, though still struggling, had now clearly defeated CART, which was less than a year away from going out of business. Brown’s company was also successful in securing deals with Formula 1 and had added offices in the UK and Hong Kong to its Indianapolis headquarters.

His success gave him the resources to found United Autosports, a sports car racing team, and he signed many high-profile drivers to compete in events. This list included Eddie Cheever, whom Brown had met that first day in Long Beach (Brown and Cheever would later have a falling out, leading Brown to sell an Indy car driven by Cheever that he owned).

Relationships both in business and in the racing world continued to pile up, one of which was F1 boss Bernie Ecclestone who became a close friend.

Meanwhile, Andretti was making a smooth transition from athlete to owner. Never realizing his goal of winning the Indy 500 at the wheel, he would win both the 500 and the series championship as an owner in 2005 with Dan Wheldon, and repeat the feat in 2007 with Dario Franchitti.

The team also expanded into sports car racing in the America Le Mans series in 2007, and in 2008 ventured to Europe to compete in the A1 Grand Prix series, an attempt to have a series of F1 type races similar to the soccer World Cup.

Neither effort lasted long, as the team left the ALMS when partner Acura dissolved the relationship after 2008, and the A1 series folded after the 2009 season. While the team briefly consolidated its business, it was also consolidating ownership, as Andretti bought out its partners to become the sole owner of the rebranded Andretti Autosport by 2010.

In 2016, legendary F1 team McLaren was at rock bottom. They had brought back Fernando Alonso who, along with teammate Jenson Button, had given them two championship-winning drivers, but the switch to Honda engines proved to be a disaster and the team fell far short of rivaling the series leaders.

In November, the team decided after 35 years to replace team leader Ron Dennis. In addition to the lack of track success, the team had another problem – the team lacked big sponsors compared to their rivals. Team owners Mansour Ojjeh and Shaikh Mohammed bin Essa Al-Khalifa thought Brown was the perfect person to take over.

Realizing that JMI was getting too big to be a sole proprietorship, Brown had sold the company in 2013, and although he initially remained CEO, he left in 2016, deciding he wanted to focus more on racing. Amid speculation that Brown would play a role in new Formula 1 ownership group Liberty Media, McLaren owners set up a meeting with Brown, determined not to leave until he agreed to resume their operation. He was named McLaren’s new chief executive in November.

While Brown was putting in place a long-term plan to revive the team, superstar driver Fernando Alonso was in a little more of a hurry. He immediately had a good relationship with Brown, but having to drive an unreliable and uncompetitive car at this stage in his career made him unhappy.

A solution for Alonso came from what appeared to be a joke Brown had made at the start of the season – “One of these days we should do Indy together” – and as the season progressed the two men began to take the idea more seriously. It was announced that in 2017, Alonso would do what would never have been considered under the iron fist of Ron Dennis: skip the Monaco Grand Prix to race in Indianapolis.

As Brown had said, they were going to do it together, with Honda, McLaren’s engine supplier and supplier to half the IndyCar field. For one car in a race in May 2017, the McLaren-Honda-Andretti team was born.

After an engine failure that ended a race that had led them for 27 laps, McLaren and Alonso returned to Monaco in 2018. But Andretti and Brown have continued their partnership – in Australia, where Andretti Autosport and Brown’s United Autosports have bought the Walkinshaw Racing Supercars team, which became Walkinshaw Andretti United. Andretti had already found ways to expand his interests around the world, joining the World RallyCross Championship and the all-new Formula E series in 2014.

Alonso had decided to take a break from Formula 1 in 2019 and return to Indy, but the implosion of McLaren’s relationship with Honda meant their partnership with Andretti could not be repeated.

As the team’s attempt at Indy that year ended in a disastrous failure to qualify, rumors began to circulate of a full-time entry into the American Series. IndyCar was generally off the radar of most F1 executives (who have a strong tendency to be insular in their opinions), but Brown was beginning to think an entry into IndyCar might be a way to extend McLaren’s visibility on the largely untapped US market.

In an interview, he said IndyCar was more about “when” than “if” for the team, and “when” turned out to be 2020, when they joined Sam Schmidt to form the Arrow McLaren SP team.

In 2022, it’s Andretti’s turn to try to join Brown in Formula 1. Unsurprisingly, the McLaren boss has been Andretti’s biggest supporter. While F1’s top teams fear adding another entrant who will share payments from their existing series, Brown acknowledges that even now the sport has more room to grow and grow, and Andretti will bring in more US dollars, which will benefit all teams in the long run. .

“Are we trying to grow the sport? Or are we doing what racing teams have a bad tendency to do, which is thinking about today and not the future,” Brown said in an interview earlier this year.

Brown and Andretti clearly share a vision for the sport, as both continue to expand into new technologies and new markets. The new Extreme E in 2021, an electric rallycross series, saw their partnership Andretti United with one entry, while the McLaren team entered a second. McLaren will also join Andretti as a Formula E entrant in 2023.

Zak Brown and Michael Andretti are not the typical loud, brash Americans. But the Pennsylvanian from one of motor racing’s royal families and the Californian who asked a friend to take him to see Indy Cars in Long Beach are perhaps making more noise than anyone else in the world. sports today.

What they have most in common is a love not only for Formula 1 or IndyCar, but for motor racing as a whole, and a desire to continue to attract new fans and make the bigger sport. Although they are not usually seen together at work, the bond is undeniable. If you don’t think so, ask Michael’s father, Mario, who Brown plans to give the chance to drive a late-era McLaren Formula 1 car in Texas later this year.

That the McLaren F1 cars covered in sponsor logos is a good indication that Brown has a long future with the team, but if that relationship ever ends, don’t be shocked if Andretti United F1 appears on the grid one day, with whatever future series the sport might come up with.