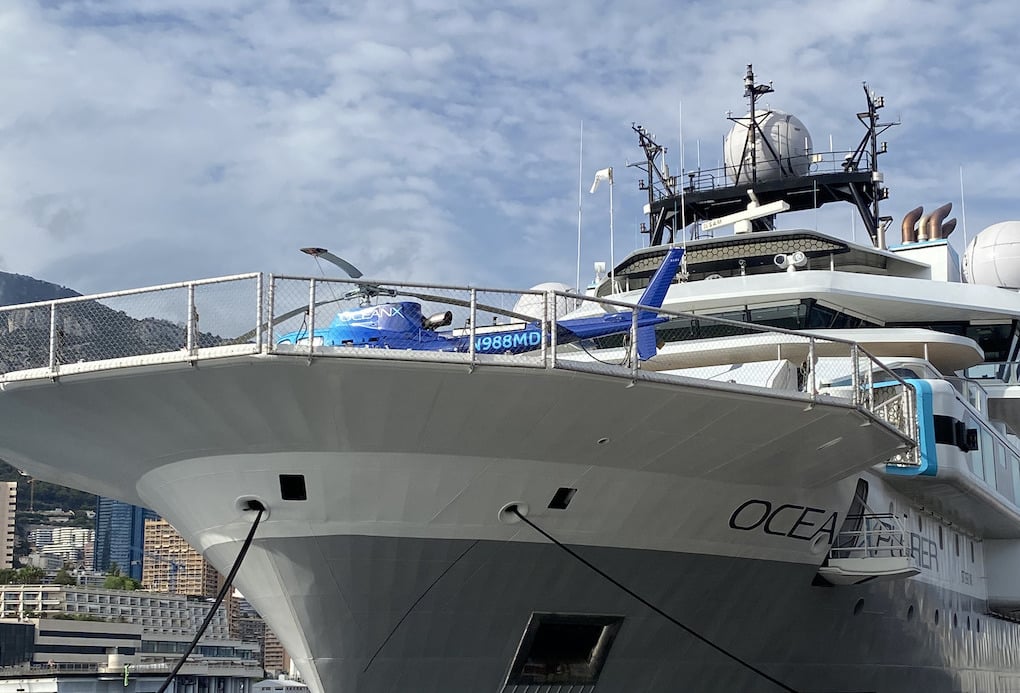 On board the exploration vessel OceanXplorer during a stopover in Monaco

If you were near Quai Rainier III on August 30 and 31, you may have noticed a large white boat topped by an electric blue helicopter. The 87-meter-long ship, called OceanXplorer, was passing through the Principality. Its mission is to welcome on board scientists and videographers who wish to unlock the secrets of the seabed.

OceanXplorer made a stopover in Monaco to celebrate the Prince Albert II Foundation and the international non-profit organization OceanX’s longstanding commitment to ocean research, education and marine conservation efforts.

We had the opportunity to visit this former oil rig support vessel, acquired by OceanX in 2018 and commissioned in 2020.

Robots to explore the seabed

Once on deck, we were introduced to two fully immersible yellow robots. These devices can descend to 1,000 meters and are equipped to allow their passengers to dive safely and capture images that will prove invaluable to the scientists studying them.

“People who have studied the oceans all their lives are discovering things they have never seen before, there have been real revelations,” explained Vincent Pieribone, Chief Scientist and co-CEO of OceanX.

Once inside, we discover a ship extremely well endowed in terms of scientific and technological equipment. And for good reason: OceanXplorer can accommodate around forty scientists and videographers on board.

They can take advantage of a whole arsenal of diving equipment, but also use robots capable of descending – in some cases – up to 6,000 meters deep. A well-equipped control room – almost like something out of a sci-fi movie – allows you to monitor underwater operations on the big screen.

The data collected by the divers is observed and analyzed in one of the ship’s four onboard laboratories. Equipped with state-of-the-art equipment, these research facilities are crucial not only for the scientific community, but also for the general public, as OceanXplorer also aims to raise awareness for the protection of the oceans.

READ ALSO: The Prince Albert II Foundation and the DIMFE launch a new call for projects for the preservation of water

Observe the sea from the air

After a maze of corridors and stairs – requiring the presence of a crew member so as not to get lost – we arrive at the top of the ship, on the heliport. From here, you can see the little blue helicopter up close, which can accommodate up to six passengers and can even land on the water thanks to a system of buoys attached to the skids.

Because sometimes marine species are best observed from the air. It should be noted that the ship is capable of accommodating larger helicopters on board. OceanXplorer therefore uses all the means at its disposal to study the oceans since, as Vincent Pieribone points out, “80% of the seabed has not yet been mapped”.

Scientists can discuss their findings and projects in the conference room. They also have access to a “media center”, equipped with Microsoft virtual reality headsets, which allow the projection of 3D holograms and offer a better representation of the different aquatic environments.

The visit ends with a final control area, where we are welcomed by Captain Roger. He and his crew monitor the progress of operations at sea and can even share videos of their latest explorations, such as in the Red Sea, observing its corals.

The short stopover in Monaco made it possible not only to celebrate the partnership with the Prince Albert II Foundation, but also to pay tribute to the Princely Family, for whom scientific discovery and the preservation of marine ecosystems have been long-standing priorities.

Prince Albert II was invited to visit the impressive ship, as well as his nephew Pierre Casiraghi. “OceanX is committed to making the ocean accessible to the world in order to continue ocean education and conservation efforts, and we are delighted to have the Prince Albert II of Monaco Foundation as a partner in our work. We are honored to work with an organization with such a legacy of supporting the world’s oceans and commitment to our shared mission. We are grateful for the support of the Government of Monaco and the incredible ocean scientists who are uncovering the secrets of our oceans every day.” said Vincent Pieribone.

Olivier Wenden, Vice-President and CEO of the Prince Albert II of Monaco Foundation, also welcomed this partnership: “Welcoming the OceanXplorer research vessel to Monaco is a wonderful opportunity to highlight the essential link between science and awareness. . We are proud to partner with OceanX and share with them the same goal of being science enablers and ambassadors. Discovering the secret beauty hidden in our seas and revealing it to the general public through powerful images with scientific messages is crucial to better educate and inspire action.