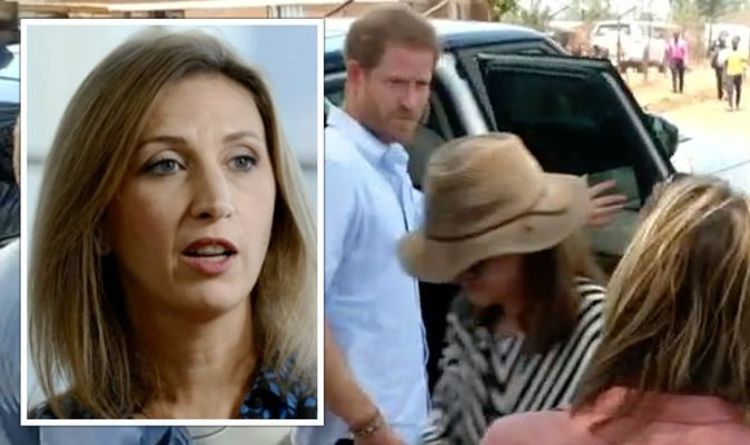 Prince Harry started showing signs of being fed up with British media during his tour with Meghan Markle in South Africa in the fall of 2019, royal experts have suggested. Royal Sky News correspondent Rhiannon Mills admitted she realized she had ‘kicked the wasp nest’ after the Duke of Sussex abruptly hit her back as she was trying to ask a question about her work during a stopover in Malawi. Images shown in the BBC documentary The Princes and the Press, Prince Harry could be seen initially ignoring Ms Mills as she questioned him before snapping, “Don’t behave like this.”

The Sky News royal correspondent said going door-to-door to members of the royal family was generally a ‘no-no’ she had done in the past with fairly positive results.

She said, “He doesn’t stop to give me a full interview, but he recognizes me or whatever. This one played out quite a different way.”

Footage of her confrontation with the Duke of Sussex was then released, showing that she approached Prince Harry at the end of a meeting to ask him “what do you hope to achieve with this?”

The Duke could be seen heading straight for his car first before turning back to Ms Mills as she twice asked him what his goals were.

He first said, laughing, “What? Ask them.”

But as Ms Mills again asked questions about the importance of speaking to local communities, Prince Harry turned with a crossed gaze to say, “Don’t behave like this.”

The Sky News presenter said: â€œMost people looked at it and thought, well, wait, that was a polite question.

â€œWhy did it explode? But looking back on it now, I had basically kicked the wasp nest. “

The Duke and Duchess of Sussex returned to the UK in January 2020 and underwent a series of engagements, including a visit to Canada House in London, before announcing their intention to step down from royal roles.

Prince Harry and Meghan have agreed to a one-year trial period away from the royal family following a tense summit at Sandringham in the presence of the Queen, Prince Charles and Prince William.

The couple made a final round of engagements in March 2020, culminating in a joint outing alongside Her Majesty on Commonwealth Day before reuniting with their son in North America.

They moved to the United States shortly before the pandemic forced borders to close and eventually settled in a mansion in Montecito, Los Angeles.

The Duchess of Sussex is yet to return to the UK while Prince Harry returned briefly twice in 2021, first to attend Prince Philip’s funeral and to help unveil a memorial statue of Princess Diana.