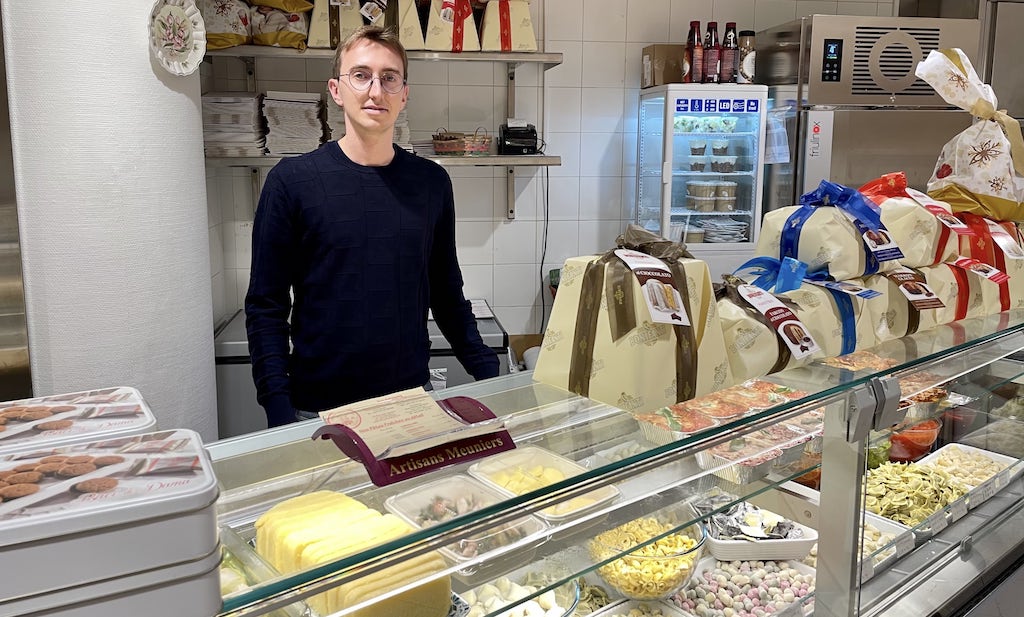 PROFILE. In Monaco, the best pasta has a name: Cesano

At 31, Alex Cesano takes the reins of the Maison des PÃ¢tes de Monaco, a family business known since 1977 for its â€œcolorful pastaâ€. This profile of a cooking enthusiast opens a new series of articles devoted to local entrepreneurs in the Principality.

In Saint-Charles, at the Condamine market or in the Casino du Port Hercule gallery, the impression is the same: an Italian culinary journey with a festival of flavors. Looking through the windows of the various traditional outlets of Maison des PÃ¢tes de Monaco, the choice seems an impossible task.

It must be said that the asparagus moons and the spinach ravioli, or the carbonara tagliatelle, will make your taste buds vibrate every time. It’s guaranteed, whether it’s your first or your thousandth visit. If you go through the Monte-Carlo market in Saint-Charles, you will inevitably come across a tall blond with round glasses. It’s Alex Cesano.

Traveling helps us realize how lucky we are to be here. I came home convinced!

After obtaining his BTS in hotel management and a few years traveling on several continents, from San Diego to Denver, via Sydney and London, Alex Cesano returned to Monaco in 2015, with the intention of working alongside his parents.

â€œInitially, I wanted to cook, but in fact, I preferred to be in the dining room, in contact with customers,â€ says Alex, who was born and raised in Monaco. I had already worked with my parents on the stalls of the La Condamine market when I was younger. So I thought to myself, why not? I really wanted to live in Monaco again. Traveling helps us realize how lucky we are to be here. I came home convinced! “

Used to eating pasta at least once a day from a young age – â€œwith us, we love it, we can’t do without pasta! – he succeeded his parents, both natives of Cuneo. Parents who have continued to increase the notoriety of the Maison des PÃ¢tes which, in addition to the first production premises and the La Condamine stall, expanded to Saint-Charles in 2011 and to the Casino gallery of Port Hercule in 2019.

The best sellers? I would say the classics – tagliatelle, rigatoni. But also the more elaborate ones, such as porcini bells or mezzaluna asparagus.

“That way, we work together, but each in his own space,” says the supporter of AS Monaco with a smile. â€œMy father takes care of the production and my mother regularly comes to La Condamine. â€œA real family tradition, which should continue for many years to come. â€œMy two brothers could join me. The first is 20, so he has time, but the other is thinking about it. Hope it will be soon.

The success of the Maison des PÃ¢tes, which also supplies many Monegasque restaurants, such as the MÃ©ridien or the Fairmont, can be explained in large part by the quality of the products they use. â€œThe flour, eggs, cold cuts and cheese come from Italy and the meat directly from suppliers located in Monaco. Our pasta is prepared every morning in our production unit, near the Condamine market. It is fresh and without preservatives. “

Arthur Leclerc is a fan

A know-how appreciated by some Monegasque celebrities. “Arthur Leclerc often stops to pick up pasta,” says the eldest of three sons Cesano. â€œWhen he played for AS Monaco, TiÃ©mouÃ© Bakayoko also played regularly.

In total, no less than 150 kg of fresh pasta are sold every day. â€œThis represents around 750 servings,â€ explains the young manager. The best sellers? I would say the classics – tagliatelle, rigatoni. But also the more elaborate ones, like the bells with porcini mushrooms or the mezzaluna with asparagus.

In love with the Riviera and the Principality, the Cesano and Alex do not intend to stop there. New points of sale may well emerge in the years to come. â€œWe work a lot, but when we love what we do, we don’t count pointsâ€. The recipe for success !

A stellar team has signed on to bring Rocky Point restaurant back to life. | Food blog