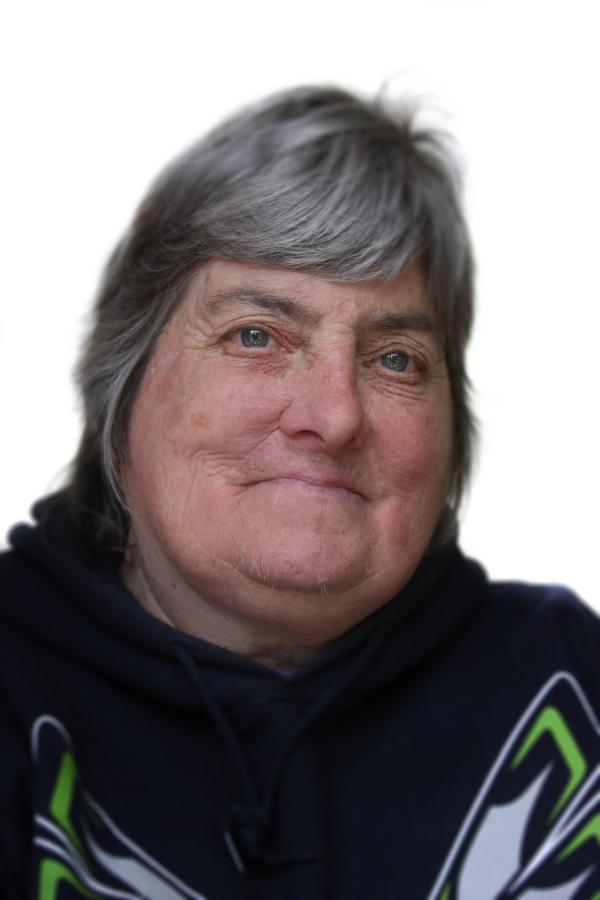 Debbie DeBusk knows how to sell the news. Before she even started selling Real Change in 2008, she sold the Seattle Daily Times and the Post-Intelligencer in downtown Seattle. Vending Real Change is different because it does not require an assigned location or schedule, aspects to which it has adapted quickly.

DeBusk is currently posting for Real Change in Magnolia, at the Seattle Neighborhood Post Office, where she has a strong relationship with her clients.

Debbie put a lot of thought into choosing her seat in front of Magnolia’s post office. She tried Magnolia Market, but it was slow in the morning and someone else sold Real Change there in the afternoon. Albertson was even slower. Then there was Starbucks.

“Starbucks goes in spurts. You have so many now, then you have two more, three and so on. I looked across the street, saw this post office and I Said, “Dude, there’s a lot of people going in there.”

She befriended postal workers, and the sales – before COVID – were still good. She remembers better days, saying some, “I couldn’t even hold them in my hand for more than five minutes. Everyone who passed her said, “I’ll have one!” Give me one! “

DeBusk, who is an expert on the subject, claims that some Real Change issues sell much better than others. “Some of them are dull on the first page, like this time it was a little brown, almost no design.” She thinks that if there’s something on the cover that’s shiny, the number tends to be a big seller.

DeBusk stopped selling the Seattle Times and the Seattle Post-Intelligencer when the latter stopped printing, and then when the Times shut down weekday street sales.

She wants Real Change to look like a daily newspaper – a bigger size, a sports page, and more comics. Once, she might have even drawn comics herself. “I used to like to draw, but I take medicine and it tires me so much now. “

Regarding newspaper format, she says newspapers like the Times used to be bigger. “If you watch old TV shows like ‘I Love Lucy’, [one of her favorites] aren’t their journals really big? Just think about trying to keep such a big journal in your hands! “

Her husband also wants a sports page. “He used to be a Seahawks season pass holder until the price started to go up.” Debbie would go with him to the Kingdome matches. “The prices were cheaper. I have never been to a game in the new stadium.

DeBusk was born and raised in Seattle. She’s been here all her life and can’t see herself leaving anytime soon. She saw this city transform, with her family. When she was 12, her father passed away; she and her mother and her five siblings were forced to abandon their West Seattle home and move to the Admiral’s District. After graduating from high school, Debbie began making parts for Boeing and other large industrial companies. Today, she has lived in permanent accommodation with her husband for almost 40 years.

Over the past few years, while selling stories on the streets of Seattle, Debbie has seen a lot. She loves to tell about the people she meets, the dogs she sees and the weird scenes that sometimes play out in front of her while she is working.

She loves observing the characters in her community, even when sales are slow.

“Sometimes it’s hard when I say ‘Hello’ and they don’t even look at me. But a lot of people just don’t know about Real Change. They end up coming back, ”she said.

Patience is a quality that makes DeBusk successful in its paper sales. “Always polite and never arrogant” is her mantra – and she takes it seriously.

Speaking of interactions with her clients, she says, “We both say ‘Hello’ and we both say ‘Thank you’. It’s always easy with them, and that’s a good thing. Every once in a while I get a 20 from someone, and people are nice to me.

DeBusk’s favorite part of Real Change is the people.

“[My customers] are good to me, and I’ve gotten feedback on how, you know, I approach people – I don’t get mad or something.