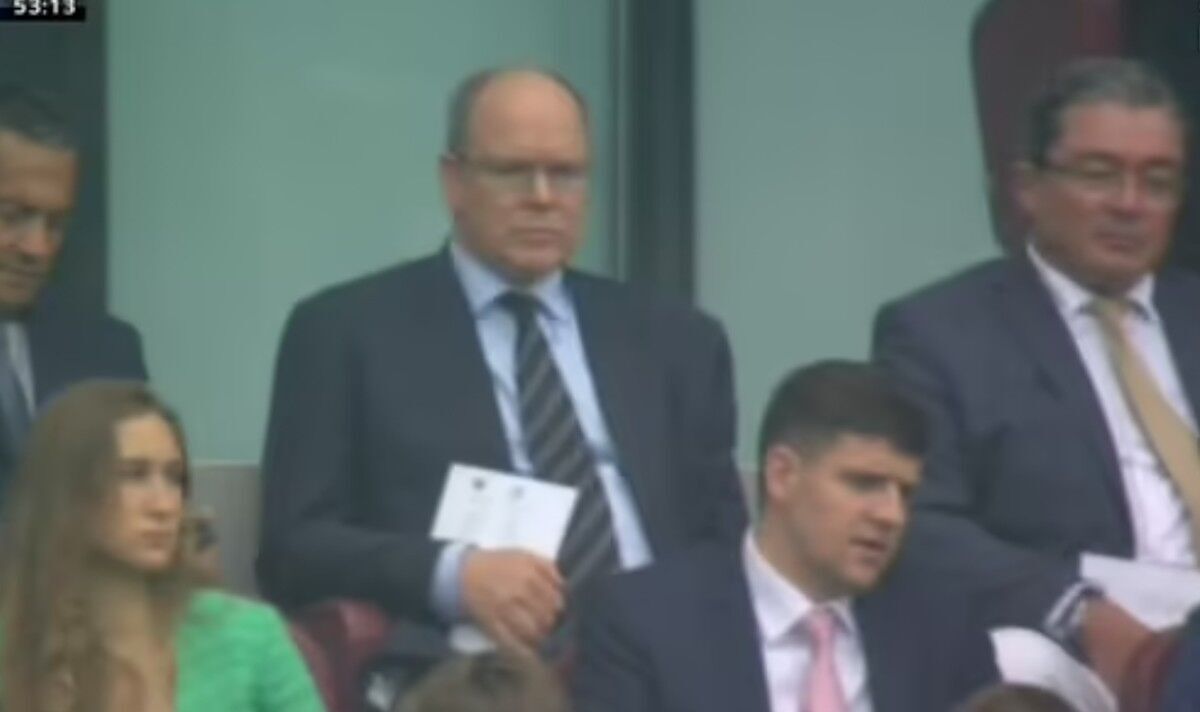 The head of the Grimaldi family made a surprise visit to the UK and was spotted among members of the public during the West Ham v Manchester City Premier League match on May 15. For the visit, Prince Albert donned a smart navy suit paired with a baby blue shirt and striped tie.

The Monegasque prince is known to be a football fanatic and has even stepped onto the pitch himself in the past to take part in charity matches.

Over the past few years he has professed his admiration for West Ham and today he was among the fans bidding farewell to team captain Mark Noble, who is retiring this season.

Albert appeared to be at the stadium without his wife Princess Charlene or his children Prince Jacques and Princess Gabriella.

Charlene returned to the public eye earlier this month, after a long absence due to health issues.

Charlene marked her return to public duties by attending the Monaco E-Prix with Albert and their children.

The following week, the family of four went out to attend the Sainte Dévote rugby tournament, a competition open to children under 12.

Charlene’s health problems began in May last year when she was stuck in South Africa after developing a serious ENT infection.

The royal had gone there to carry out conservation work with her charity.

READ MORE: Prince Harry and Meghan had ‘a high price to pay’ for Oprah interview

While her trip was to last less than a fortnight, Charlene stayed in the country where she was raised until November.

The Monegasque princess was eventually able to return to her family – but her return to Monaco did not immediately translate into a return to her public duties.

A few days later, the Monaco palace said the princess needed time to rest and recover. Prince Albert told People magazine that Charlene decided to enter a treatment center after it became clear she was suffering from “exhaustion, both emotional and physical”.

Princess Charlene returned from the facility in March, as announced by the Principality Palace.

A statement released at the time read: “In agreement with her doctors and while her recovery is proceeding well, Their Royal Highnesses have jointly agreed that Princess Charlene can now continue her recovery in the Principality with her husband and children.”

Urging Monegasque citizens to be patient, the statement added that Charlene would not return to duty immediately, saying: “The coming weeks should allow Princess Charlene to further strengthen her health, before gradually resuming her official duties and commitments.”

The Duke of Cambridge visited Wembley Stadium as FA chairman.

However, as he walked onto the pitch to shake hands with Chelsea and Liverpool players, he was booed by football fans in the stands, a move condemned by prominent politicians.

Among them, the Speaker of the House of Commons, Sir Lindsay Hoyle, told the MailOnline: “I totally condemn all the fans who booed Prince William at Wembley today.

“The FA Cup final should be an occasion where we come together as a country.

“It shouldn’t be marred by the totally disgraceful behavior of a minority of fans.

“In this year of all years – the Queen’s Platinum Jubilee – it is appalling.”

Some people at the stadium also booed the national anthem.

At the end of the match, Prince William – who did not comment on the incident – presented the Cup to the Liverpool players.

Liverpool won the tense final on penalties after drawing 0-0 with Chelsea in 120 minutes.