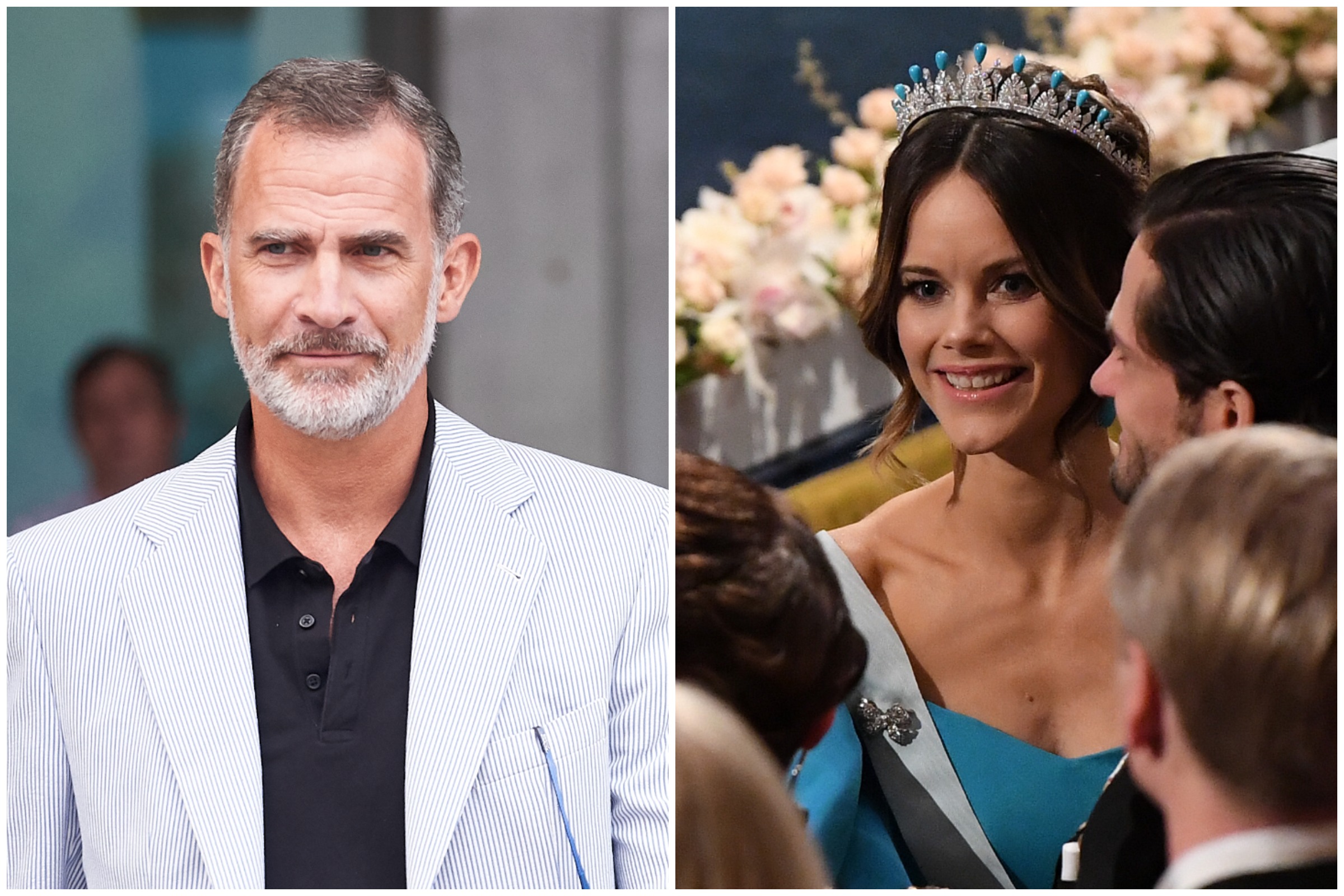 Royals around the world

Queen Elizabeth II and her family may seem like the superstars of world royalty, but they are by no means the only monarchy.

Royal families are found all over the world, including Spain, Monaco, Dubai, Thailand, Saudi Arabia, Norway, Sweden, and the Netherlands.

Their lives are just as dramatic … sometimes more.

Prince Albert of Monaco was once known among world royalty for his reluctance to get married.

He is the father of American actress Jazmin Grace Grimaldi, born in 1992, after a brief relationship with Tamara Rotolo, then on vacation on the French Riviera.

In the end, Rotolo chose to raise his daughter outside of the searing gaze of royalty, Harper’s Bazaar reported. Albert didn’t publicly acknowledge Jazmin’s existence until 2006, when the paparazzi descended on her.

A year earlier, in 2005, Nicole Coste, a flight attendant from Togo, showed up to tell the world that the prince was the father of her baby boy Alexandre.

The prince then confirmed his claims, although neither of the two children was in the line of succession to the Monegasque throne, as the law required the parents to be married.

Albert ascended to the throne in 2005 after the death of his father Prince Rainier and in 2011 eventually married Princess Charlene. The couple have twins, Princess Gabriella and heir to the throne Prince Jacques, born in December 2014.

More recently, Albert was a footnote in the story of Prince Andrew’s relationship with Jeffrey Epstein based on the account of American literary agent John Brockman.

In an email to a client, Brockman explained how he got to Epstein’s New York mansion when he saw Prince Andrew getting a foot massage.

Cited in the magazine New Republic in 2019, the email indicated that he had heard Andrew say: “In Monaco, Albert works 12 hours a day but at 9 p.m., when he goes out, he does what he wants, and nobody cares. . But, if I do, I’m in big trouble. “

Nothing suggests that Albert had a relationship with Epstein.

The pre-royal life of Princess Sofia of Sweden was more colorful than most who move from the normal world to the rarefied corridors of the royal palace.

In 2014, at age 20, she was a glamor model for a Swedish men’s magazine and in 2005 was a candidate for the national version of the reality show. Hotel Paradis.

She met Prince Carl Philip in 2010 while they were eating at the same restaurant, and got married five years later at the Chapel Royal in Stockholm in June 2015.

The couple have three children together after the birth of their youngest in March.

Crown Prince Mohammed bin Salman, often known as MBS, has been the de facto ruler of Saudi Arabia since his father, King Salman, ascended to the throne in 2015, according to the BBC.

However, a US intelligence report in February revealed that he approved of Jamal Khashoggi’s murder at the Saudi consulate in Istanbul in October 2018.

the Washington post journalist was the victim of an “extrajudicial execution for which the State of the Kingdom of Saudi Arabia is responsible”, revealed a UN investigation.

He gave Meghan Markle a set of chandelier earrings as a wedding gift to mark the moment she married Prince Harry in May of the same year.

However, the jewelry proved controversial after she wore it to a state dinner in Fiji on October 23, 2018, just weeks after Khashoggi’s death, according to the British newspaper. Time reported.

Prince Seeiso is the younger brother of King Letsie III of Lesotho and also a close personal friend of Prince Harry.

The Duke of Sussex is a regular visitor to the country, located within the borders of South Africa, including during his sabbatical year in 2004.

The two princes together created a charity in 2006 called Sentebale, which supports the mental health of young people with HIV and AIDS.

Most recently, Prince Seeiso was the guest of Harry and Meghan’s 2018 royal wedding at Windsor Castle.

Thailand’s King Bhumibol Adulyadej was the longest reigning monarch in the world until his death at the age of 88 in 2016 after 70 years on the throne.

“Her Majesty passed away peacefully at Siriraj Hospital,” said a statement released at the time.

King Maha Vajiralongkorn then joined the jet and was described as the “playboy king” in the British newspaper The sun.

He spends much of the year in Germany where the local tabloid Bild reported seeing the coronavirus lockdown with an entire floor reserved at the four-star Grand Hotel Sonnenbichl in the resort town of Garmisch-Partenkirchen.

The new king appointed his mistress, Sineenat Wongvajirapakdi, as his official bride in 2019 in a ceremony in which she lay at his feet as he anointed her.

However, he stripped her of the title months later in October for attempting to rise to the same status as the Queen, the BBC reported.

Last year he reinstated the rank, with a notice in the Royal Gazette declaring that she “is not tarnished” and adding: “From now on it will be as if she has never been stripped of her military ranks or royal decorations.

King Felipe VI of Spain ascended to the throne in 2014 after the abdication of his father, King Juan Carlos.

According to the Spanish newspaper El Mundo, he told Rafael Spottorno, head of the royal household, that he did not want his son to spend his life waiting for the throne.

Cited in the The telegraph of the day, the departing monarch said: “I don’t want my son to fade while waiting like Prince Charles.”

Prince Harry and Meghan have spoken a lot about their aversion to the media, but Felipe had a warmer relationship with at least one journalist, his wife, Queen Letizia.

Born Letizia Ortiz, the former Spanish host fell in love with the royal in 2002 while covering the sinking of the oil tanker Prestige in northern Spain, Hello! reported.

They married in 2004 and have two children, Leonora and Sofia.

7. Willem-Alexander of the Netherlands

His wife, Queen Maxima, was an Argentine economist who previously worked in New York for Deutsche Bank.

However, their engagement was controversial after it emerged that her father, Jorge Zorreguieta, had served as a minister in the Argentine government in the 1970s and 1980s during the days of a brutal military junta, The independent reported.

A Dutch parliament investigation cleared the marriage after discovering that Zorreguieta was likely aware of the atrocities committed during the dirty war, but she as a child did not, according to the newspaper.

Needless to say, he was excluded from their marriage in 2002 and also missed the investiture ceremony which made his daughter Queen in 2013.

Princess Latifa captured the world’s imaginations when she tried to flee her family by boat in February 2018. Her actions came after she recorded a video describing how she was banned from traveling abroad.

Eight days after the start of the Indian Ocean crossing, the princess was returned to Dubai after a commando raid on the boat, the BBC reported.

For years, the world heard nothing from her until in February videos published by Sky News showed her describing her imprisonment by her father, Prime Minister Mohammed bin Rashid al Maktoum.

Princess Latifa said in the footage: “So I am in a villa. I am a hostage. This villa has been turned into a prison. All windows are barred, I cannot open any windows.

“There are five policemen outside and two policemen inside the house and I can’t even go out to get some air.”

She added, “I’m doing this video from a bathroom because it’s the only room with a door I can lock.”

More recently, photos of Latifa outside of Dubai have surfaced and activists fighting for her freedom have reported positive developments.

King Harald V of Norway had a troubled childhood after the invasion of Germany in World War II when he was six years old.

His mother fled with him and his two sisters and they lived through the war in America before returning home after the liberation of Norway in 1945.

In 1968, he married the love of his life, Queen Sonja, amid a controversy over whether she was a “commoner”, that is, not of royal or aristocratic lineage.

He was born in 1955 and studied in America, Great Britain and Switzerland, where he met his future wife at the University of Geneva in 1980.

He married Maria Teresa Mestre, of Cuban descent, the following year, on February 14, 1981, and the couple now have five children together.

Explore the famous architects and real estate of Monaco