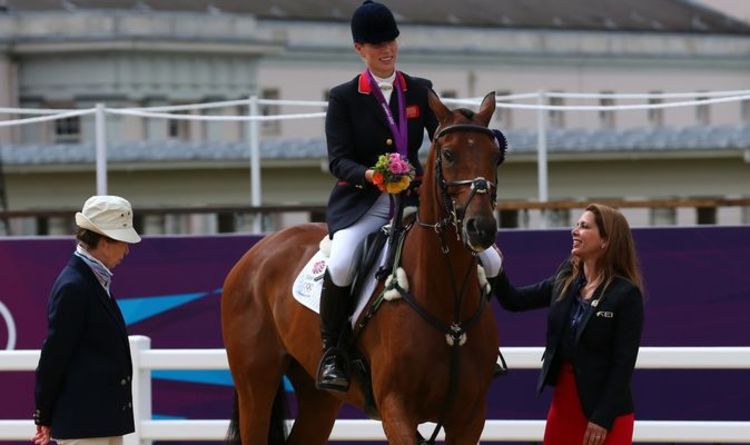 Princess Anne wished the GB team the best of luck ahead of competing in the postponed 2020 Olympics in Tokyo, which begins in just three days. But when she was just 45, the Princess Royal set her own record as the first member of the British Royal Family to compete in the Olympics when she competed in the three-day equestrian event at the Games 1976 in Montreal.

Her appearance was so spectacular that the Queen, The Duke of Edinburgh, Prince Charles, Prince Andrew and Prince Edward traveled to Canada to offer their support to Anne.

Princess Anne finished in sixth place after suffering a concussion falling from the Queen’s horse. After climbing up Goodwill, Anne finished the trail and later said she couldn’t remember the remaining jumps.

And it seems that horseback riding is an area in which the royal family has thrived.

The Princess Royal’s first husband, Captain Mark Phillips, competed with Team GB’s three-day event squad in 1972, where he won a gold medal. In 1988 he also won a silver medal.

Unsurprisingly, Princess Anne and Phillip’s daughter Zara Tindall followed in her parents’ footsteps to win a household silver medal at the London 2012 Olympics. Former England rugby player’s wife Mike Tindall, was even presented with his medal by his mother. Much like Anne, Zara had many members of her family, including Prince William and Kate Middleton, who cheered her on on the sidelines.

But it wasn’t just members of the British Royal Family who competed in the Olympics.

People of blue blood from Monaco, Spain, Jordan, Norway and Thailand competed in the events of the Summer Olympics.

In 2000, three members of other royal families appeared at the Sydney Games pools, households and handball stadiums.

Inaki Urdangarin was the only one to win a medal. He won a bronze medal in 2000, as in 1996, with the Spanish handball team. Urdangarin had married Spanish royalty just a year after his first Olympic success when he married the Infanta Cristina.

Cristina was also an Olympian. In 1988 at the Seoul Games, she competed with the Spanish sailing team. Unlike her partner, she was unable to win any medals. Just four years later, in his native waters off Barcelona, â€‹â€‹his brother, later Felipe VI of Spain, again competed as a member of the sailing team.

The old Etonian Prince Bira of Siam also competed as a sailor. He did not receive a medal but competed in the Olympic Games in Melbourne, Rome, Tokyo and Munich.

Prince Bira even faced King Harald of Norway. Before succeeding the Norwegian throne, Harald represented the Scandinavian nation in sailing in 1964, 1968 and finally in 1972.