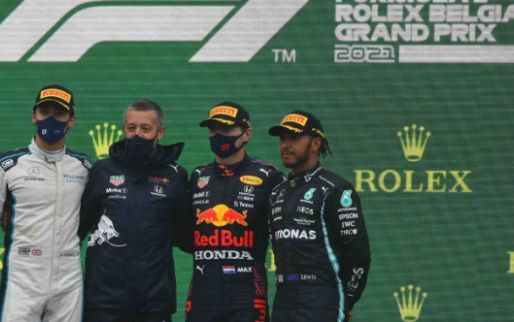 The Belgian Grand Prix marked the sixth time in Formula 1 history that half points were awarded. When have these other moments been in the past 71 years?

Last Sunday Max Verstappen was declared the winner of the shortest Formula 1 race of all time. The drivers drove two laps behind the safety car, but officially that’s only one lap. It has happened five times before that the required 75 percent could not be covered. When was that, and has the championship ever come down to half a point?

The F1 world reacts to Raikkonen’s departure: “A good friend and a true champion”

In 1975, the Spanish Grand Prix took place on the urban circuit of Montjuïc Park in Barcelona. Before the start of the race, double world champion, Emerson Fittipaldi withdrew because he thought the circuit was too dangerous. The fact that these concerns were justified was demonstrated when Ralf Stommelen had a serious accident with his car flying over the guardrail in the public. Four people were killed. The race continued for a few more laps until the severity of the crash was noticed and the race was reported.

The Austrian race weekend of 1975 left two dead; Mark Donohue was seriously injured during the warm-up and died a few days later. A marshal was shot in the accident and also died from his injuries. The race was characterized by heavy rain, so it was finally interrupted after the 29th lap.

The arrival of the 1984 Monaco Grand Prix is ​​well known to many Formula 1 viewers. Ayrton Senna came to Alain Prost at breakneck speed, gaining two to three seconds per lap. However, the precipitation got heavier and Prost signaled that the race should be stopped. This happened at the exact moment Senna performed his passing maneuver. The race was not resumed and therefore Prost took the victory.

Championship decided by half a point

The premature end of the Monaco Grand Prix cost Prost dearly later that year. He lost the championship by half a point to Niki Lauda, ​​who won his third world title. As Lauda did not finish in Monaco, Prost may have lost the championship this weekend. However, he probably wouldn’t have won the race if he had gone ahead, so how much of a difference that made remains a speculation, in part due to the fact that there were fewer points distributed then. than today.

The shortest race in Formula 1 history until last Sunday took place at the Adelaide circuit. This time Senna was in the lead until the race was stopped after fourteen laps due to heavy rain. Senna won the race ahead of Nigel Mansell, who crashed shortly before but still finished second as the score from one lap ahead was used as the result.

The race started in dry conditions, but rain was expected soon. Ferrari made the bet to put Kimi Raikkonen on rain tires while it was still dry but did so too soon. Once the rain came, more and more riders left the track and eventually the race was stopped. Just like in Belgium in 2021, it was a long wait for nothing. The race ended and Jenson Button was declared the winner. This time Nick Heidfeld was lucky: he also got away, but because the position from the previous lap was used up he managed to hold onto second place.