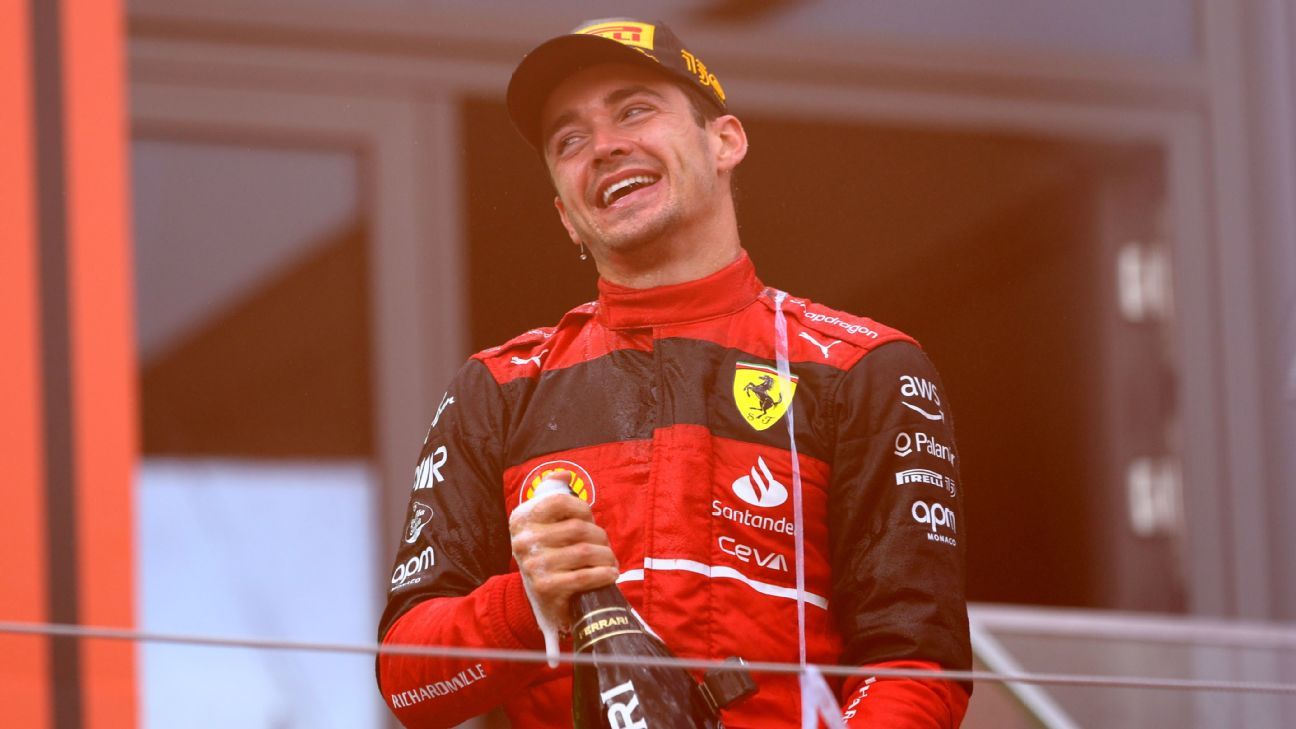 SPIELBERG, Austria — Even when things are going well for Charles Leclerc, there always seems to be negative expectation just around the corner.

Ferrari had the pace to secure a double victory in Austria which had the potential to reduce Max Verstappen’s championship lead over Leclerc by at least 10 points. It all went so well for 57 of the 71 laps, only for Carlos Sainz to suffer complete engine failure as he began to line up Verstappen’s Red Bull for an overtake.

Then, in order to safely clean up the charred remains of Sainz’s Ferrari, a virtual safety car was called in which eliminated Leclerc’s hard-earned advantage over Verstappen as they both searched for fresh tyres.

It was not cause for immediate panic, but as Leclerc looked to reduce his lead over Red Bull again, his car’s throttle began to stick open on the entrance to the corners.

“It wasn’t just a little stressful, it was very stressful!” Leclerc said after the race. “The throttle was really inconsistent and in the middle of the corner it would get stuck at any percentage, so in turn 3 it was very, very tricky because that’s where you don’t want any more speed in mid-turn.”

Leclerc managed to hold on for the win, but in the final phase of the race, Verstappen took the point for the fastest lap, meaning the seven-point advantage Leclerc had hoped to gain over his title rival was reduced to six. Add Saturday’s sprint race result into the mix and on a weekend where Leclerc had the measure of Verstappen over a Grand Prix distance, he took just five points off the champion’s already considerable lead in title.

Halfway through the season, that’s enough to make you think this might not be Leclerc’s year, regardless of his driving quality. Look back on his 2022 record so far and it’s littered with cruel luck and missed opportunities – the kind that are not only devastating in terms of points lost, but also mentally draining for a driver.

Since the Australian Grand Prix in April, in which Leclerc looked second to none and took his second win in three races, the Ferrari driver has seen a 43-point lead over Verstappen turn into a 38-point deficit ( peaking at 44 points after Saturday’s sprint race).

Much of that momentum in Verstappen’s favor is beyond Leclerc’s control, and while Sunday’s victory could mark a turning point in the tide, the Ferrari driver’s record in the five rounds before Austria could still cost him the championship.

Leclerc missed an almost certain win on a turbo and MGU-H failure one weekend when Verstappen looked restless, spun in the gravel but still won the race thanks to teammate Sergio Perez moving on for him.

A week after Spain’s disappointment, Leclerc missed another shot at what should have been an outright victory – this time on home turf. Leclerc had done everything on the streets of Monte Carlo to secure pole position and take the lead from the start, but Ferrari mismanaged the transition from wet to dry track and a sloppy strategy dropped Leclerc to fourth. place on arrival.

Leclerc gave up the lead in Azerbaijan after engine failure midway through the race. Although he was leading, Verstappen had the advantage in terms of strategy and Leclerc would have probably finished behind the two Red Bulls in third position.

Powertrain issues in earlier rounds pushed Leclerc over his engine quota after just eight rounds and resulted in a back-of-the-grid starting position in Round 9 at Montreal. He finished fifth at the flag, but given Sainz battled for the win in the other Ferrari, a top-three finish should have been pretty much guaranteed.

Estimated loss of points: At least 5

Leclerc looked locked in for victory at Silverstone until a late safety car period saw Ferrari leaving him on the track with old tires rather than buying new ones. The decision saw him drop to fourth on a weekend’s restart when Verstappen lost performance mid-race due to debris becoming lodged under his car.

Even by that relatively conservative estimate, Leclerc has dropped 72 points to reliability issues and poor strategy calls this year. Combined with the extra points Verstappen scored in Spain and Monaco following Leclerc’s misfortune ahead of him, the points swing in the standings would be even bigger.

Of course, a similar list could be drawn up for Verstappen, including two retirements at the start of the year after almost certain second places and the damage to the floor at Silverstone which deprived him of a probable victory. According to another rough estimate, these three incidents would have cost him 55 points, which is significant but still not on par with Leclerc’s unfortunate history.

However, the purpose of this list is not so much to pose a hypothetical scenario, but rather to highlight how close the two top teams have been in terms of performance and how close the championship could still be if the relative luck of Verstappen and Leclerc turns. It’s also a reminder that titles aren’t won on car performance alone, but on a mix of performance, reliability and execution of strategy in races – the latter two clearly weak points for Ferrari this year.

How did Ferrari turn the tide against Red Bull in Austria?

But over the course of a full race, Verstappen struggled with a loss of rear tire performance – known as degradation in F1 – while Ferrari managed its tires to perfection.

“I think in terms of pure speed the performance of the two cars is very similar and the qualifying result proves that,” Ferrari team principal Mattia Binotto said on Sunday night. “I don’t think there’s a lot of difference between the cars, and it’s more of a bigger downgrade on the Red Bull that won the race for Charles.

“We could see in the sprint race that we had a little more advantage in terms of tire degradation. We saw it even more in the grand prix because we started putting pressure on Max from the start. beginning and pushing him to have more pace.” and damage the tires.

“What we saw yesterday in the sprint was more evident today because we put more pressure on him.

Analysis from the Red Bull camp was similar, although team principal Christian Horner could not put his finger on exactly why tire degradation had been so severe in Austria when it had previously been a strength of Red Bull over Ferrari in earlier rounds. .

“Our degradation, when you look at the sprint race, we pushed a little bit harder at the start and paid a little bit at the end, but on the whole stint, according to our analysis, it was identical to Ferrari,” Horner said. . “So the only thing that changed overnight was the rain [on race day morning]the temperature slightly and of course the fuel load, so we just need to understand why in this first stint our degree was significantly worse than Charles and Carlos.

“It was strange today. Just a week ago at Silverstone we also looked pretty good on degradation. I think the problem is that these tires are quite sensitive and if you’re not in the good [setup] window with them you can pay a penalty with degradation and that’s what we did today.”

In Friday’s qualifying in Austria, Verstappen and Leclerc were just 0.029 seconds apart on a track that, on paper, should have played to Red Bull’s straight-line speed advantage. Along with the tire advantage held on Sunday, Ferrari’s single-lap performance at the Red Bull Ring is another positive for Leclerc’s championship chances.

“We still have a disadvantage against Red Bull in straight line speed without a doubt, especially with the DRS open, so their DRS is more powerful than ours,” Binotto explained. “We worked a lot on it with a new rear wing that we first introduced on Charles’ car in Canada and then on both cars in the UK.

“And with this new rear wing, I think we just closed the gap we had in terms of speed. I think they have a slight advantage, but it’s very small, and I think in terms of more power, we are very close and then it’s only on the limited grip in the corners where we can make the difference.

“Today we were not only quick thanks to the car, but also the drivers. They had a fantastic weekend in terms of car balance, tire management and track handling. Overall they are doing very well and driving very fast.” .”

The performance stage in Austria was encouraging for Ferrari, but it took place against the backdrop of yet another engine failure. Sainz’s lap 57 retirement was Ferrari’s most dramatic so far in 2022, with two explosions visible under the bonnet before the rear of the car caught fire.

Fortunately Sainz was able to extricate himself from the burning car just in time, but reliability is clearly an issue for Ferrari this year and one that needs to be addressed.

“I think we’ve only had two engine failures so far, the others were more engines than internal combustion engines,” said Binotto when asked about the team’s engine problems this year. “Obviously we have to look at what happened today and if it was the same as what happened with Charles in Baku, it’s certainly very likely.

“It is certainly a concern, but the people of Maranello are working very hard to try to resolve this issue and what happened to Carlos has not yet been resolved. We have new elements and I know how bad they are. good, and I can count on the problems being dealt with as soon as possible.”

For Leclerc, it will be crucial to get two more good results in the next two races before F1’s summer break. Closing the gap to 25 points – the same as a race win – would seem like a manageable goal heading into the final nine races, but to do that he and his team will need to be at the top of their game.

“I really needed that one,” Leclerc said of his win in Austria. “I mean, the last five races have been incredibly tough for me, but also for the team, obviously.

“And to finally show that we have the pace in the car and that we can do it, it’s unbelievable. So yes, we have to push until the end.”